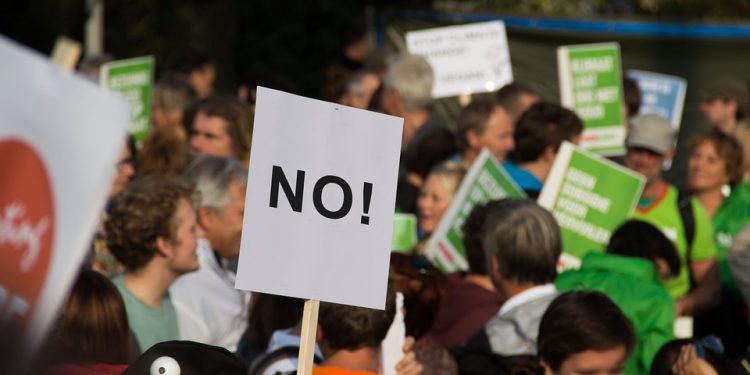 by Tom Nyarunda
in Bitcoin News, Markets
Reading Time: 3 mins read
0
Share on FacebookShare on TwitterShare on LinkedinShare via WhatsappShare via Email

Some citizens have taken to the streets to protest against making Bitcoin legal tender in El Salvador. The new law requires all economic agents to accept Bitcoin alongside the U.S. dollar as a form of payment.

However, the outbreak of protests shows that some people in the country aren’t convinced the decision is correct. El Salvador President Nayib Bukele proposed the much-debated Bitcoin law; it takes effect on September 7, 2021. Bukele believes that making Bitcoin legal tender is beneficial and will see the country save over $400 million paid annually on transaction fees. The president is convinced BTC would facilitate instant and secure financial transactions.

The fear of the unknown

The protestors, which included pensioners and veterans, walked through the streets of San Salvador carrying placards. Most of them expressed their apprehension against the upcoming law and were worried the government would pay their welfare and pensions in Bitcoin instead of the U.S. dollar. The fear of the unknown comes from the feeling that most people aren’t tech-savvy and can’t, therefore, use cryptocurrency.  Stanley Quinteros, a member of the Supreme Court of Justice’s workers’ union, said:

“We know this coin fluctuates drastically. Its value changes from one second to another, and we will have no control over it.”

According to local media, the protestors’ opposition was based because the law “was imposed on the people without consultation. They carried placards that read: “No To Bitcoin,” “No To Money Laundering,” and “The Working Class Rejects Bitcoin.”

Introduce a 20% surcharge if forced to accept Bitcoin

Members of the Popular Resistance and Rebellion Block opposed the upcoming law last July citing Bitcoin’s volatility and feared it would be used for illegal activity. The Salvadoran Association of International Cargo Carriers (ASTIC) is also opposed to the Bitcoin move. The association said its members would introduce a 20% surcharge if forced to accept Bitcoin transactions.

The El Salvador Bitcoin law takes effect on September 7, 2021. The government promised a $30 bonus in Bitcoin for those who download the official digital wallet. It’s not yet clear whether accepting Bitcoin payments will be mandatory. President Bukele said in June the government would not force anyone to accept Bitcoin payments if they didn’t want to.

“The purpose of this law is to regulate Bitcoin as unrestricted legal tender with liberating power, unlimited in any transaction, and to any title that public or private natural or legal persons require carrying out.”

The U.S dollar is the popular legal tender in El Salvador uses, and the country has no say as far as U.S. monetary policy is concerned.

If you liked this article you might also enjoy: Lawmaker In Argentina Proposes Bill To Pay Workers In Crypto