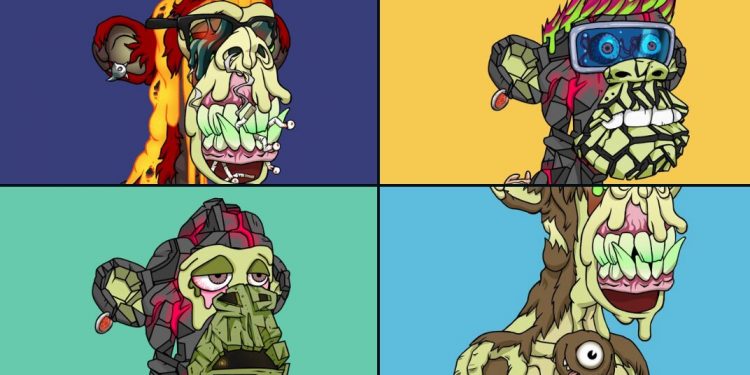 by Jay Speakman
in NFTs
Reading Time: 4 mins read
1
Share on FacebookShare on TwitterShare on LinkedinShare via WhatsappShare via Email

Bored Ape Yacht Club raised $96 million in a single hour in a public sale of 10,000 Mutant Apes on Saturday night, and airdropped a further 10,000 vials of mutant serum that allowed existing holders of the Ethereum-based NFT to mint new apes for free.

Bored Ape Yacht Club, which debuted in April 2021, was originally made up of 10,000 randomly generated NFTs. Each has unique characteristics. Some are wearing tweed suits while others smoke. Rare ones shoot laser beams from their eyes.

The project is similar to CryptoPunks, which has 10,000 computer-generated avatars that look similar to empty and are even more expensive.

A cure for boredom: transform your Ape

Holders of Bored Ape tokens received one of three serums by airdrop: M1, M2, or Mega Mutant (M3). When a Bored Ape is injected with M1 or M2 serum, the resulting Mutant Ape retains the original ape’s characteristics. The M3 serum transforms an ape into something completely different, with potentially rarer—and thus more valuable—traits.

Airdropped Apes for the lucky

The airdrop was a great deal for Bored Ape holders because it allowed them to keep their original NFT while also minting a valuable additional token.

The Mutant Apes, which were claimed for free by holders or purchased for 3 ETH in the public sale, are now selling for a minimum of 7 ETH ($22,400) each. According to data from the NFT marketplace OpenSea, the Mutant Apes have generated approximately $88.4 million in trading volume since their launch.

Bored Ape owners (including NBA star Stephen Curry as of yesterday) frequently use their ape as their Twitter profile picture to signal their membership in the club. Curry paid $180,000 for his ape.

Bored Apes is the world’s fifth-most successful crypto-collectible project. According to CryptoSlam data, the apes have made $354 million in sales. The cheapest (non-mutant) Bored Ape is now available for 25 ETH ($80,000).

Apes can now have a best friend

Bored Ape holders were airdropped a companion dog NFT from the Bored Ape Kennel Club collection earlier this month. On August 10, a bundle of a Bored Ape and its dog sold for $1 million.

Sotheby’s will auction off a collection of Bored Apes on September 2. While the auction will provide significant public exposure for the project, not everyone is pleased with the sale, or rather the venue.

More than a few are wondering why Bored Apes, or other pricey NFTs are being sold on traditional auction platforms.

“Why are we selling our JPEGs through Sotheby’s and Christie’s, which take a 25% cut?” CoinShares’ Meltem Demirors tweeted last night. “We must abandon our reliance on old-school institutions for validation.”

Another way of looking at it is some people might welcome the validation bestowed by a Sothebys or Christies when spending millions on a cartoon ape.

If you liked this article, you might also like: NFT Madness: Pudgy Penguins Push Punks and Bored Apes Out of Top Spots