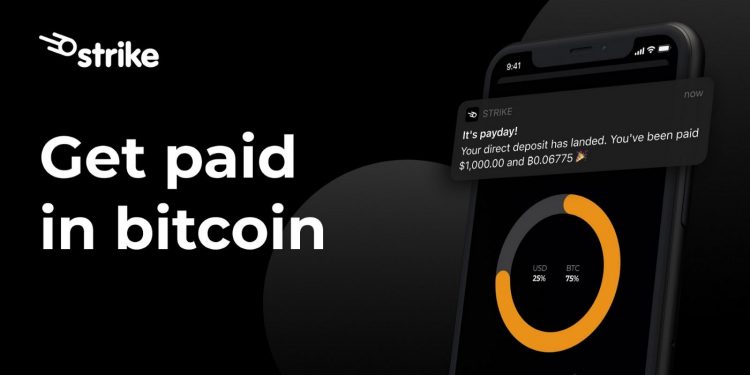 Pay me in bitcoin

The new feature enables users in the United States to instantly convert their entire paycheck or a portion of it into Bitcoin. Users can do so regardless of whether their employers have embraced Bitcoin or not.

Lightning Network payments platform Strike has announced a new feature that allows users to convert their income into Bitcoin. The ‘Pay Me In Bitcoin’ feature enables users to use their bank accounts and routing numbers to convert using an App programmatically. The company’s founder Jack Mallers said in a blog post:

“I am unbelievably excited to announce and publicly release Pay Me in Bitcoin with Strike […] today. Anyone with a Strike account, no matter their employer, can get paid in Bitcoin.”

According to the announcement, users can have their salaries deposited directly to their Strike accounts. Once their employers have made the deposit, the users can choose the automatically swapped amount and credited it to their Bitcoin balance. Strike is not charging a fee for the service.

The development results from an experiment that began last year after National Football League player Russell Okung used Strike to split his $13 million salary 50-50 between Bitcoin and fiat. Since then, several other athletes followed suit, making the service available to Strike’s U.S-based. customers.

The payment platform’s founder said ‘Pay Me in Bitcoin’ is intended to create financial freedom for users who can’t get paid directly in Bitcoin. According to him, anyone in the U.S. or El Salvador can automatically sign up for Strike and start saving part of their income in BTC. He said that would enable them to shield themselves from “high inflation rates and be more sovereign over their money.” Maller said:

“If you are not getting a 25% raise every year and you are saving in dollars, you are not out-earning or out-saving the rate of inflation or the increase in the cost of living, and your quality of life will degrade as time goes on.”

You don’t have to convince your boss to like Bitcoin

“You don’t have to work for a special company, you don’t have to convince your boss to like Bitcoin, and you don’t need to nag your CFO to put Bitcoin on the balance sheet. All you need to do is share your Strike account details and configure your ‘Pay Me in Bitcoin’ split.”

Strike’s expanded feature comes only a few weeks after Coinbase announced it would let users deposit all or part of their paychecks in crypto or dollars, also without a fee. Nonetheless, unlike Coinbase, which lists many cryptocurrencies, Strike strictly deals with Bitcoin. Strike is the company that facilitating the usage of Bitcoin and the Lightning Network in El Salvador.