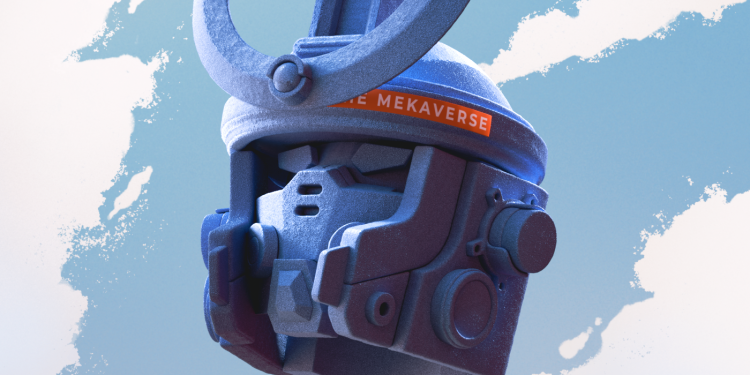 by Jay Speakman
in NFTs, Trends
Reading Time: 3 mins read
0
Share on FacebookShare on TwitterShare on LinkedinShare via WhatsappShare via Email

Mekas are mechanical-style NFTs that are trending in the crypto community.  Specifically, a collection of 8,888 one-of-a-kind “Mekas” inspired by Japanese anime classics such as Mobile Suit Gundam.

The entire Meka NFT collection sold out on October 7, nearly a week before the actual artwork for the 3D mech-suit avatars was revealed. Since then, sales on OpenSea have totaled more than 20,000 ETH (approximately $70 million US Dollar).

The collection contains of 8888 unique Mekas. But you may now ask yourself, why exactly 8888? Simply because 8 is a lucky number in many Asian countries.

The very beginning of MekaVerse

During a five-month trip to Asia, European designers Mattey and Matt B, whose clients have included Apple, Nike, and MTV, had the idea for the MekaVerse. Each Meka is a one-of-a-kind 3D illustration produced by an algorithm that combines hundreds of designed visual elements.

Prospective collectors had to register for a raffle using their Twitter or Discord accounts. The winners received one or two Mekas for 0.2 ETH each (approximately $720) plus transaction (or “gas”) fees. The raffle was designed to help fans compete against whales, or big-money collectors. In the absence of such a mechanism, whales frequently walk away with the best of a drop due to their willingness to pay the highest Ethereum network fees.

Over 172,000 unique wallets signed up for the chance to purchase one of the 8,888 Mekas. As soon as the minting process started, the value of the winners’ Mekas began to rise — as of Tuesday, the floor price for Mekas on OpenSea was 6.35 ETH (approximately $22,000).

This is a prime example that staying ahead of the market could give you an advantage – using something like Mythia will give you a heads up of mints that you should be considering, while you still have time to buy. It tracks discussions on Twitter and Discord, and in the case of Mekas NFT, it would have directed your attention towards the upcoming collection.

The hype around the Mekas

What caused the Meka drop to become so hot? It’s most likely a combination of factors, ranging from the appealing robot-suit concept to the growing buzz surrounding previous collectible NFT projects. Larva Labs, the creators of CryptoPunks, recently signed with Hollywood mega-agency UTA, and the creators of Bored Ape Yacht Club recently signed with high profile agents as well.

Physical Meka toys, a more ambitious second drop and a possible foray into short films and streetwear have all been teased on the MekaVerse’s roadmap. The creative team narrowed down some options:

NFT sales surpassed $10 billion US Dollar in the third quarter of 2021. More than eight times the previous quarter’s volume. Despite the headlines, NFT collecting isn’t exactly a mainstream pastime. The MekaVerse, with its low initial pWrice point, raffle system, and potential for physical merch, appeared to be popular among first-time collectors. Will the developers’ promise of a “more ambitious” second drop translate into a bigger, more inclusive release?

How much would you pay for your very own “Meka”? Leave us a comment below.

Quik is a blockchain-based marketplace that enables users to mint, buy, and sell NFT domains with minimal effort and without...