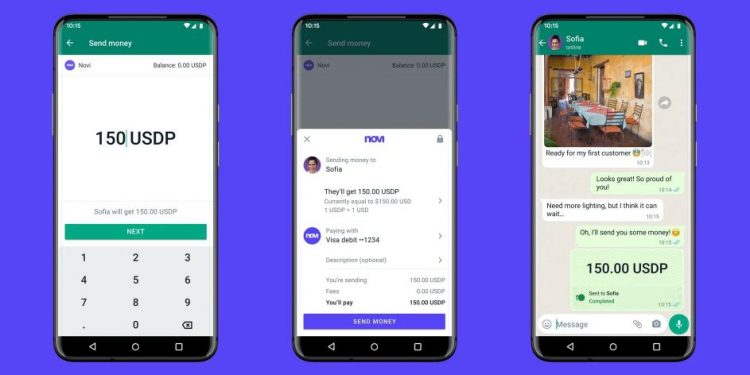 by Tom Nyarunda
in Technology
Reading Time: 3 mins read
0
Share on FacebookShare on TwitterShare on LinkedinShare via WhatsappShare via Email

WhatsApp is testing cryptocurrency payments on its platform. Some users can now send and receive money through Novi, a cryptocurrency digital wallet.

WhatsApp has launched a pilot program for its troubled cryptocurrency payments in the United States with the help of the Novi digital wallet. The development comes a little over a week following the announcement by the company’s top executive David Marcus that he would be leaving at the end of December.

Novi’s incoming head Stephane Kasriel said the digital wallet launched on pilot six weeks ago would enable payments via Pax Dollars (USDP), a Stablecoin issued by Paxos, and that’s pegged on the U.S. dollar. As per the announcement, the pilot will let a limited number of people send and receive money within a chat. Talking about the initiative, Kasriel stated:

“We’re still very early in the Novi pilot journey, so we made the decision to test this new entry point in one country to start and will look to extend it once we’ve heard from people what they think of this new experience.”

To send money on WhatsApp using Novi, users will have to select the paper clip app on Android or the ‘+’ button on iOS and select ‘Payment’ from the menu. After that, they’ll need to follow the on-screen instructions to log into your account. Money added to a Novi account is converted to Pax Dollar (USDP), which it describes as a regulated and stable digital currency.

Remittances are vital for developing countries

Sending and receiving money would be a critical use case for Novi. It would enable users, especially those in developing countries, to send remittances to people back home from the diaspora. Remittances are vital for developing countries like India, with people working in the West transferring more funds through remittance than anyone else in the world.

That’s where Meta would genuinely love to see its Novi process gain traction, which would help boost the utility and value of WhatsApp, the most used messaging app in India, at 487 million local users. That would also fuel its eCommerce push once users are transferring funds in the app, making it much easier to get them to buy products or pay for services in-stream.

The Indian Government is still firmly against cryptocurrency. Meta will be hoping that this initial trial will better showcase the potential value of the system, which could then help it convince regulators in other markets to let it launch Novi there as well.

Metaverse Showdown: The Sandbox vs Decentraland

What do the Disney Accelerator program, Starbucks Coffee Company, Starbucks Odyssey (Web3), and Robinhood all have in common? They all...