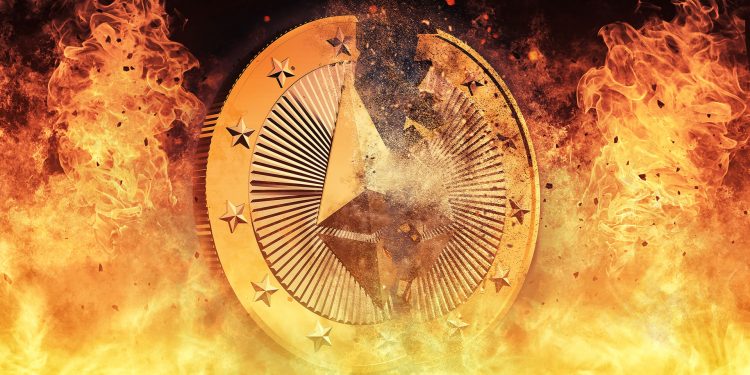 Since its inception, the network has destroyed a total of 2,000,996 Ethereum, according to Watch the Burn, a dashboard site that monitors the burn mechanism. In monetary terms, that equates to nearly $6B removed from circulation for good.

EIP-1559, the technical name for the burn mechanism, was implemented in the London hard fork as one of several network updates.

The fee structure of the Ethereum network was restructured as part of this “Ethereum Improvement Proposal.”

Instead of all fees paid to miners for performing various operations on Ethereum, EIP-1559 divides these fees into a base fee and tips (the latter of which would go to miners).

It is the base fee that is burned, which means the cryptocurrency is destroyed and removed from circulation.

This burn mechanism has also contributed to the spread of the “ultra-sound money” meme.

The meme goes on to say that if there is a surge in Ethereum activity, the destruction of the circulating supply may outpace the amount issued via block rewards.

As a result, there are fewer and fewer Ethereum on the market to buy, resulting in a deflationary effect.

Joe Lubin, Ethereum co-founder and CEO of ConsenSys , reminded attendees at a recent event that another upgrade will bring this particular meme even more into focus.

The ‘Consensus Layer’ and  Burned Ethereum

Along with the London Hard Fork, Ethereum is nearing the completion of its most comprehensive upgrade to date.

According to Lubin, Ethereum 2.0, recently rebranded as “Consensus Layer,” would improve the network’s transaction speed, lower costs, and “put an end to Ethereum’s carbon or energy footprint problem.”

The upgrade will transition Ethereum from a proof-of-work (PoW) consensus mechanism, which Bitcoin also employs to validate transactions, to a different model known as proof-of-stake (PoS). The latter mechanism is better for the environment because it requires less computing power to achieve comparable levels of security.

Ethereum and Bitcoin: What’s the difference?

Ethereum, like Bitcoin, is a decentralized open source project that is not owned or operated by a single person. Anyone with access to the internet can run an Ethereum node and interact with the network. Ethereum, on the other hand, differs from Bitcoin in its ability to create and execute smart contracts. On Ethereum, smart contracts enable a vast ecosystem of applications, including stablecoins (which are pegged to the dollar via smart contracts), decentralized finance apps (known collectively as DeFi), and other decentralized apps (or dapps).

Ethereum, like Bitcoin, is protected by a global network of computers known as “miners” that process and verify transactions. Now, Ethereum is moving away from PoW and towards PoS.

Since the transition to Ethereum 2.0 will result in a much lower emissions rate, fewer Ethereum will be given to validators for network security because their operating costs will be much lower. Running a traditional PoW mining operation, for example, has a huge overhead and only makes sense if the reward is worth it. Even if the rewards are reduced, validators are still incentivized to do their job without that overhead. As a result, there will be a lower supply of new ETH entering the market.

Simultaneously, Ethereum’s most recent EIP-1559 enhancement introduced a burn mechanism, which destroys a certain amount of ETH with each transaction.

These two changes create a situation in which tons (digitally speaking) of ETH are destroyed on one end while less ETH is created on the other. A dramatic deflationary pressure emerges almost immediately.

When the merge happen more ETH will be burned every day than ETH issued. And because much less ether will be issued to secure the network the goal of ‘ultra-sound money’ seems to be closer to reality. At the time of this post the price of ETH was $2902.26 up 1.84%.

The burn could amount to a compelling case for ETH’s future price.

This article is provided for educational purposes only and is not an inducement to invest in Ethereum or any other cryptocurrency. As always, do your own research and never invest more than you can afford to lose.

When venturing into crypto trading, individuals may see high potential for high returns in instances that require more startup capital...

Binance trends as the largest crypto trading platform in terms of volume. Margin trading allows you to trade assets on...