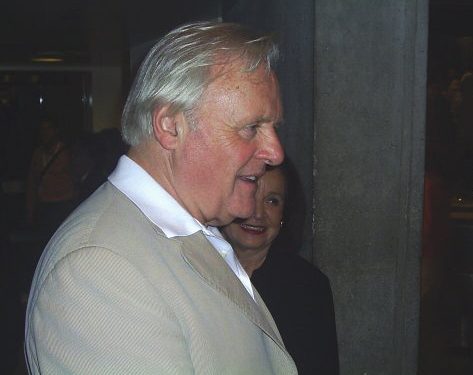 Celebrated actor and filmmaker Anthony Hopkins has made negotiations with an NFT marketplace designed for films to release his new motion picture, Zero Contact.

Anthony Hopkins will be starring in the central role of the movie which lasts sixty minutes. The feature will be released on Vuele towards the end of the summer. Never before has a feature length film been sold as an NFT.

Vuele, a business to customer program, was founded only in the first half of 2021 when the NFTs were at maximum hype. Vuele will give customers the ability to access limited edition movies to enjoy as well as trade within the Vuele network. Vuele allows it’s customers to purchase content with credit cards as well for those who aren’t yet crypto savvy.

Zero Contact: A ground breaking film on every level

The script features a cast of five main characters who have no option but to join forces in order to take down a device which could be either the savior of humanity or the demise of all life on the planet. The script was written by Cam Cannon and the feature was directed by Rick Dugdale. The director Dugdale said to this film:

“Everything about this film is unconventional, from the way we shot it using Zoom and remote production, to its distribution. It only makes sense for a film like this to continue its ground-breaking trajectory by revolutionizing the way Hollywood films are premiered, viewed, and shared utilizing blockchain technology.””

Dugdale has become mesmerized with how NFTs can be used to distribute films. Dugdale on the topic of NFT films:

“It creates scarcity in copies of the film, and protects against piracy.”

A partnership that could change the future of film distribution

The team around Vuele is also highly thrilled about the partnership. Cameron Chell, the co-founder of Vuele, said:

“For Vuele’s very first movie to be featuring such a high-profile star is a major endorsement… For what we see as the next frontier for Hollywood… And how it will premiere feature-length films and merchandise collectibles surrounding the films produced. This is just the beginning for our platform and NFT capabilities. Which will enable our partners to explore new opportunities and set new standards of how movies will be consumed by fans and collectors. Vuele is perfectly poised to transform the direct-to-consumer entertainment distribution channel.”

Art an NFTs have been a good match and people are still trying to grasp where this NFT journey could lead. We now know that it has arrived in the film industry, but we can rest assured that it will not stop there.

If you enjoyed this article, you might want to read following article: Introducing Nafter: NFTs for creators and their fans.

Lawmaker In Argentina Proposes Bill To Pay Workers In Crypto