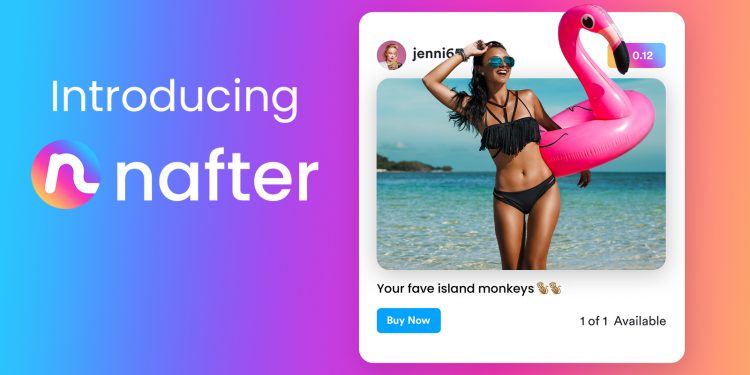 Introducing Nafter: NFTs For Influencers And Their Fans

by Pascal Niggli
in Trends
Reading Time: 3 mins read
0
Share on FacebookShare on TwitterShare on LinkedinShare via WhatsappShare via Email

NFTs have been around for a while, however, the New York based startup Nafter is working on taking NFTs to a new level. Nafter is planning on taking NFTs to the masses by making it easy for influencers and creators to create NFTs for their fans. It launched on Pancakeswap on May 14th and the App will be available shortly after.

Nafter: NFTs for influencers and creators

According to their website (nafter.io) Nafter is an NFT market place for creators and fans that allows you to create, buy, sell, collect and mint NFTs over the phone. As influencers are creating new content on a daily basis, Nafter gives them another way to distribute and monetize content. Nafter makes this process as easy as creating a post on social media with four easy steps: snap, mint, sell, collect!

Nafter will connect to your MetaMask wallet and will make buying an NFT extremely easy.

Collecting has become popular in the past years. The value of collectors items has skyrocketed and Nafter is making it possible for influencers and creators to make their own collectors items. And fans now have another way to connect to their favorite influencers. By staking their NFT tokens on their influencers Nafter profile they will have access to exclusive content by that creator and they will have access to further exclusive NAFT tokens.

Nafter could become a threat to social apps such as Facebook and Instagram. The similarity in the logo of Nafter and Instagram might be an indication for how Nafter is trying to position itself. In a recent tweet on social media, Nafter CEO Jonathan Sulay mentioned that he heard that some social media platforms have Nafter on their radar.

Nafter has the potential to stir up the social media game, especially with its new way to monetize content. Whatever CEO Jonathan Sulay heard, it is very likely that this NFT feature for social media is indeed of interest for companies such as Facebook and could potentially be a threat for the social media giant. It would not come as a surprise if Instagram will add a similar feature in the future. We will be on the lookout for this.

Nafter is the logical next step in the NFT game. As the world of non-fungible tokens is maturing, it is important that the process of creating one becomes easier. And Nafter does exactly that. If the Nafter App holds what it promises it will bring NFTs to the main stream. The flip side to this, however, is that the current hype of NFTs could be a bubble. As long as Non-fungible tokens are difficult to create and the process is not transparent, the supply will be low. But the easier it is to create an NFT, the more competition and supply there will be. How will this affect the price of NFTs in the future?

Meme Season Still On: How Long Does It Last?