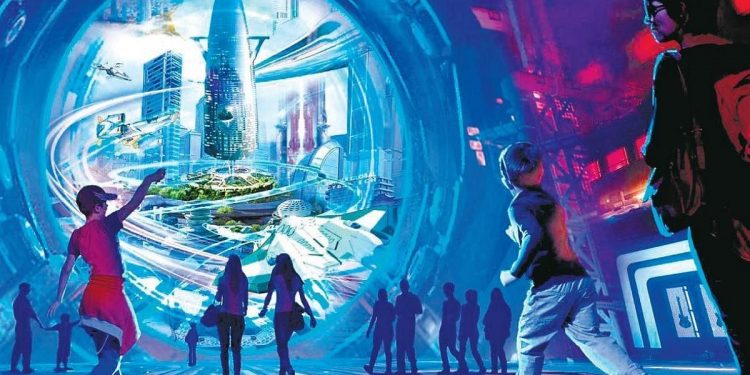 The Metaverse: A Quick Guide to the Good and Bad

The metaverse has the potential to serve as a link between physical and digital assets, and NFTs play an important role in promoting this function. A huge risk is that users could spend their entire lives immersed in virtual worlds.

Could the metaverse’s artificial technology help people learn languages, overcome depression, and even learn to spend less time gaming. The metaverse, like online gaming, will be accessible to anyone, anywhere in the world.

Metaverse: The Good and the Bad

We’ve been hearing a lot lately about the metaverse’s good and bad aspects, the yin and yang of virtual reality along with various scenarios as to who or what will own the metaverse. Meta? Microsoft?

There appear to be two schools of thought. Some argue that the metaverse is a bridge between physical and digital realities, while others argue that it is attempting to replace the real world with a virtual one in which we will all spend eternity hunched over our computers.

“The metaverse, by definition, is a bridge,” says Jordan R. Heathfield, MADworld’s Head of Marketing. It is critical for those who are creating the metaverse or metaverse elements to build that bridge in order to drive scalability.”

Heathfield believes it is critical to create a digital environment in which people want to participate. This environment must allow them to create an avatar of themselves and construct the things they want to see and experience. However, this raises natural concerns about how much time people will end up spending in this virtual space.

“Most metaverse creators probably want people to spend all of their waking hours, and possibly even all of their sleeping hours, inside their metaverse,” he says. Having said that, he believes the metaverse can bring empowerment, particularly in terms of how NFTs and digital currencies may be incorporated. Heathfield claims that NFTs and digital currency help to promote the metaverse’s function as a bridge between the two realities.

“NFTs are a way for you to understand ownership and value appreciation for assets you’ve created within the metaverse.” In some games, you can buy an asset that everyone has, but you can add new elements to that asset as you play. It becomes more valuable as you add new elements, play more, and devote more hours to it. At that point, you can resell it. As a result, there’s an incentive for people to spend even more time in the metaverse.” Jordan describes the Sandbox as a “gateway drug,” but the metaverse will be much larger than the Sandbox platform alone.

Omar Corona, the founder of MetaLabs, believes that every new development has advantages and disadvantages. “Playing video games can be a lot of fun. There are children who become so engrossed in these things that they play video games for 12 hours a day and become addicted to them. When we look at the metaverse and consider VR, AR—augmented reality, virtual reality—it’s the next step in immersing ourselves in that space.”

Omar does not own an Oculus VR headset and does not play video games because he does not want to become so immersed in the metaverse that it takes over his daily life. “When we factor in virtual and augmented reality, it’s ten times more addictive than computer gaming today.” As a result, I can almost imagine children never leaving the metaverse. The danger [of the metaverse] is that people lose their sense of reality.” He expresses concern that this is “the dark side of the metaverse.”

The metaverse, on the other hand, brings with it a plethora of positive developments. According to Hkon Harberg, Co-Founder of WiV Technology, the metaverse is comparable to online gaming, which has made the gaming industry accessible to almost everyone. “Suddenly, you meet people you could never afford or have the opportunity to meet otherwise.” Bringing this next layer into this, which is the metaverse, is a beautiful thing in that regard.”

Hkon explains how real-world concepts and experiences, such as wine consumption, can be transferred to the digital realm. When creating an NFT or a token for a bottle of wine, the first step is to create a digital representation, which is simply a static image, he explains. “We can actually take it further and create the same bottle, but in the metaverse,” he adds.

Others see the metaverse as agnostic, noting that anything can be turned negative or positive depending on how you look at it. For example, how the metaverse and artificial intelligence (AI) could aid in the treatment of mental health issues.

It’s only a matter of time before the metaverse becomes a reality, given the rate at which technologies are being developed and businesses are implementing innovative ideas centered on immersive reality.

If you liked this article, you might also like: Buying Digital Property on Decentraland: Is Now The Right Time?

DiveWallet is Launching on the Spark Launchpad on March 5, 2022

Mahaba Labs Launches the You Collective, with Over 100 Unique Traits