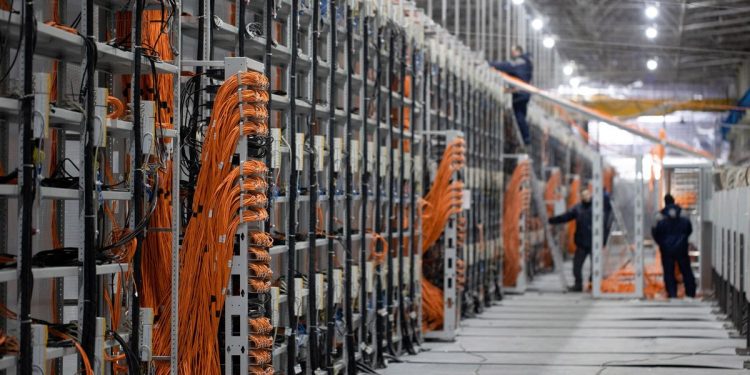 How Long Does it Take to Mine One Bitcoin?

by Tom Nyarunda
in Education
Reading Time: 3 mins read
0
Share on FacebookShare on TwitterShare on LinkedinShare via WhatsappShare via Email

The Bitcoin mining procedure is a random, unpredictable activity that requires sufficient energy, equipment, capacity, and time. Miners receive the new Bitcoin as compensation for their work.

As the supply of 21 million Bitcoins draws closer, people who are new to the mining game or just curious are asking one simple question. How long does it take to mine one Bitcoin? Cryptocurrency mining is still a popular venture that requires mining rigs and electricity to mine despite garnering criticism for its environmental impact.

What is Bitcoin Mining?

Bitcoin mining is a process that sees high-powered computers competing to discover a Bitcoin block and earn rewards for doing so. Miners generally use specialized equipment such as ASIC mining rigs. Going solo can be slightly more efficient for miners but riskier since the rewards come less frequently.

How long does it take to mine 1 BTC?

On average, it would take around 10 minutes to discover a block. The 10 minutes is ideal when you have the perfect software and hardware, but only a few have the means and luxury to afford this. As a result, most users can mine a Bitcoin in 30 days.

Every block yields a 6.25 Bitcoin reward for the miner who discovers it successfully. However, you want to understand that the process of discovering an entire Bitcoin involves stiff competition within the network.

Since there are tens of thousands of Bitcoin miners at every moment and there is only one single miner in the entire community who will successfully discover a block, the odds of any miner single-handedly finding a block is exceptionally negligible.

To beat the odds, most miners combine efforts and form mining pools where they combine their hash rates with standing a better chance of discovering a new block. As a result, regardless of which miner in the pool makes the discovery, they will distribute the rewards evenly among themselves.

Is it Possible to Mine Bitcoin for Free?

Equipment costs anywhere from a few hundred dollars up to about $10,000, while the cost of power can be high; for example, in November 2021, the price of a Bitcoin was hovering around $55,000. However, it depends on the electricity costs in one’s area. There are also options to rent out equipment for mining. Sites like Truely give out comprehensive information and reviews about these cloud mining services.

Looking at the cost, it’s clear why most miners join pools to harness the computational power of hardware owned by several miners, but then each miner only receives a portion of the mined Bitcoin. When there are more miners in the network, the difficulty of mining increases. As a result, each block requires more computational power to solve. This is likely only to increase, especially after the Bitcoin hash rate hits its all-time high.

How Much Bitcoin Can You Mine in a Day?

Since theoretically, every Bitcoin block takes 10 minutes to mine, up to 144 blocks can be mined daily. This means that at the current rate following the latest Bitcoin halving, 900 BTC are available in rewards every day. Today’s largest mining pools are Foundry USA and AntPool, and they are responsible for 15.9% and 15.4 % of the total hash rate, respectively. With 144 blocks mined each day, Foundry USA should see a reward of approximately 168 BTC each day.