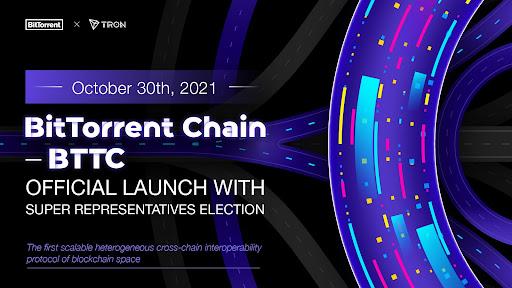 TRON, one of the world’s largest and most popular blockchain-based operating systems, and BitTorrent, the leader in peer-to-peer protocols and products, announced the official launch of BitTorrent Chain (BTTC) on October 30th, 2021. BTTC marks TRON and BitTorrents’ first-ever foray into the cross-chain field, heralding the advent of a whole new era!  Now calling for quality projects and institutions around the world.

BTTC is the first heterogeneous cross-chain interoperability protocol built on TRON, co-developed by the core teams of BitTorrent and TRON. The protocol adopts a PoS (Proof of Stake) consensus mechanism, deploying multiple Super Representatives to validate transactions, and is compatible with EVM.  Furthermore, BTTC will support and be compatible with TRON, Ethereum, and Binance Smart Chain (BSC) upon its release, allowing users to transfer mainstream assets among TRON, Ethereum, and BSC in a decentralized manner without any restrictions.

BitTorrent Chain (BTTC) is committed to building a healthy TRON ecosystem that benefits all its global users and welcomes the participation of outstanding institutions and project teams. Participants who successfully apply will receive a formal notice after the application is closed and officially participate in the BTTC Super Representative election.

It is worth noting that the election channel will be closed once the Super Representative quota and BTT staking volume reach the upper limit. After becoming a Super Representative, users can earn a certain amount of BTT and participate in community governance.

The specific election scheme and reward rules will be announced soon. Stay tuned!

About TRON and BitTorrent

Founded in 2004, BitTorrent is one of the largest decentralized peer-to-peer networks in the world, with almost 100 million active users driving 22% of upstream and 3% of downstream traffic globally.

TRON is dedicated to accelerating the decentralization of the internet VIA blockchain technology and decentralized applications (DaPPS). Founded in September 2017 by Justin Sun, the company has continued to deliver impressive achievements since MainNet launch in May 2018. July 2018 also marked the acquisition of BitTorrent, a pioneer in decentralized services boasting nearly 100M monthly active users. The TRON ecosystem has gained incredible traction in recent years, with over 52 million users on the blockchain and upwards of 2.3 billion transactions. In addition, TRON boasts the largest circulating supply of stable coins across the globe, overtaking USDT on Ethereum in April 2021.