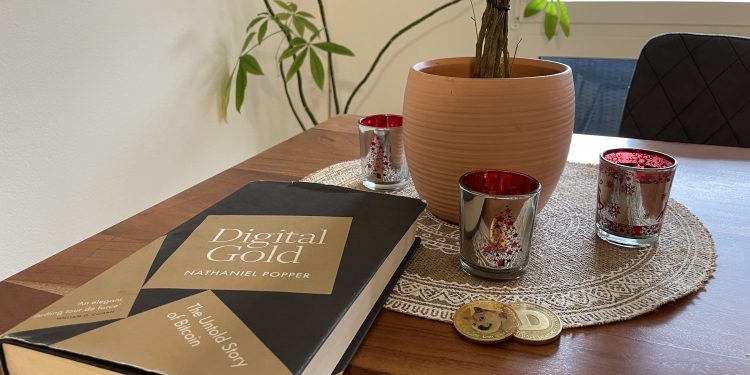 by Jay Speakman
in Education
Reading Time: 8 mins read
0
Share on FacebookShare on TwitterShare on LinkedinShare via WhatsappShare via Email

As the internet promised far-reaching, transformative ramifications in the 1990s, blockchain technology is now set to bring even more life-altering advances and advantages over conventional web experiences. People are hungry to learn more about crypto so we’ve put together a list of our top 5 crypto books that are both page-turning and informative.

While blockchain technology is most known for its role in transforming the financial industry through digital assets such as Bitcoin and the rapidly expanding DeFi sector, it has inspired many more and brought us to the cusp of the metaverse.

Here are our top 5 crypto books that everybody in the space should read!

1. The Bitcoin Standard: The Decentralized Alternative to Central Banking

The Bitcoin Standard by economist Saifedean Ammous is a comprehensive and accessible study of the history of money, from its oldest manifestations, such as seashells and cattle, to today’s nascent era of cryptocurrencies. In the interim, he argues (often controversially) how crucial sound money is for everything from individual prosperity to international peace, and how centralized fiat money has harmed innovation, culture, freedom, and much more.

The Bitcoin Standard is worth reading just for its education in sound-money history, which seeks to persuade readers why gold, and now Bitcoin, are the best and most secure forms of money for their times.

Today’s Bitcoin supporters promote the coin as a store of value, similar to gold, owing to its scarcity, but Ammous contends that it is even better than gold because it is not based on a centralized financial system. He claims that Bitcoin transforms the trust paradigm away from human institutions and toward cryptographic primitives that enable trustless and digitally proven self-custody, providing complete financial freedom.

Ammous provides readers with a new viewpoint and articulates a clear value argument for cryptocurrencies, particularly Bitcoin, by cutting through the bumper-sticker store-of-value myths and hype to show the trade-offs of the centralized monetary systems we typically take for granted. The Kindle version is actually more expensive than the hard cover.

You can purchase “The Bitcoin Standard” here:

Cryptonomicon is an engrossing, thorough tale that will appeal to anyone interested in the cryptocurrency world. Splitting the action between two historical periods—World War II and the late 1990s—Neal Stephenson provides a gripping story explaining why he believes it is vital to develop cryptographically secure private money, which in this fictitious example takes the shape of a gold-backed currency.

Given that it was written in 1999, long before the Bitcoin white paper was published, it is incredibly predictive. Stephenson also weaves several fundamental ideas of encryption and computer security into the book in a rather subtle manner.

Some believe Cryptonomicon, a speculative/historical novel about the establishment of gold-backed money, to be one of the best works on cryptocurrencies. This thought-provoking novel is available in paperback and Kindle version and is offered in several languages.

You can purchase “Cryptonomicon” here:

The Infinite Machine is excellent reading for anyone interested in the early days of the Ethereum platform and some of the people engaged in building the DeFi superhighway that it is today. The novel begins with a youthful Vitalik Buterin, the project’s Russian-Canadian visionary and co-founder. Buterin saw the untapped potential of blockchain technology, which was introduced in the Bitcoin white paper, and wrote his own white paper in 2013 outlining a decentralized computer capable of running complicated applications without the need for any trusted parties.

Russo’s background as a Bloomberg journalist helps her to express her extensive understanding of the Ethereum ecosystem in a way that even those with no blockchain expertise will find simple to grasp. Overall, The Infinite Machine reads more like a best-selling novel than the academic textbook it could have easily become.

You can purchase “The Infinite Machine” here:

4. Blockchain and the Law: The Rule of Code

Blockchain and the Law expands on the notion that lines of code can encapsulate laws that function similarly to those imposed by institutions. It covers both the practicality and constraints of writing code that functions as law, providing a fair examination of the benefits and drawbacks of smart contract-based systems. The book gives a better grasp of how difficult it would be to make this work in practice, because humans are fallible and live in a world of ambiguity and subjective interpretation, not absolutes.

You can purchase “Blockchain and the Law” here:

5. Digital Gold: Bitcoin and the Inside Story of the Misfits and Millionaires Trying to Reinvent Money

Digital Gold presents the stories of people who have had a significant impact on the social movement of Bitcoin and decentralization. It’s a look back at how these people were drawn to the principles of a global currency managed by code in the aftermath of the 2008 Global Financial Crisis.

The book delves into the events and social dynamics of the time, such as the public’s growing distrust in the US government and resentment toward Wall Street, the tension between Silicon Valley and the global financial industry, and how people from all over the world with vastly different professional and political backgrounds became enthralled by Bitcoin.

Digital Gold is an awesome read for newcomers to the industry because it details the early dissemination of the Bitcoin white paper to a specialized cryptography mailing list in late 2008.

You can purchase “Digital Gold: Bitcoin and the Inside Story of the Misfits and Millionaires Trying to Reinvent Money” here:

The popular attention that blockchain, NFTs and DeFi have gotten in the last year has prompted many people to learn everything they can about the technologies’ various fields as well as their implications. There is no better way to immerse yourself than to crack open a book (or flick on your Kindle or iPad) and dive in.

There are countless great books about crypto and blockchain and every day there are new books coming to market. Please feel free to post your favorite crypto books in the comment section.

Blockchain has moved beyond a trend and into the mainstream. Companies all over the world are already investing billions in...