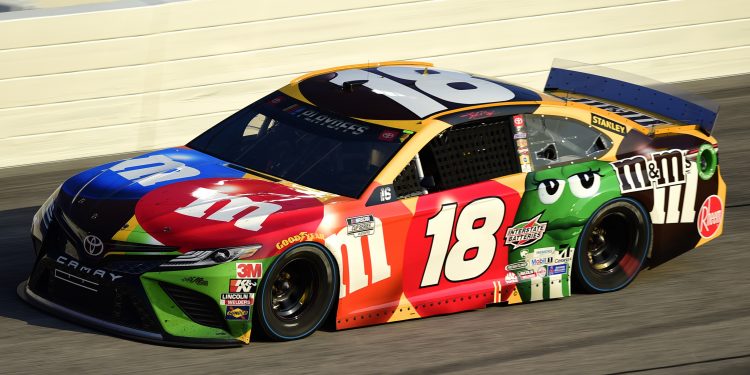 Early last year sports marketing monster Fanatics made a big bet in the NFT realm, launching Candy Digital with the Major League Baseball license and then valuing the NFT firm at $1.5 billion in October. Candy Racing is the latest addition to the company’s sports collectibles lineup.

Candy’s new racing division will launch next week with the release of NFTs based on 23 NASCAR Cup Series cars from winning teams, including Hendrick Motorsports, Joe Gibbs Racing, and Stewart-Haas Racing.

The Race Team Alliance is a non-profit organization that represents the collective business interests of the league’s 13 teams. Top drivers like Chase Elliott, Kyle Larson, and Kevin Harvick will have their cars represented as NFTs.

Each unique NFT is a 3D animation that shows a deconstructed view of NASCAR’s brand new “next-gen” team cars—the Chevrolet Camaro ZL1, Ford Mustang GT, and Toyota Camry TRD—decked out in the paint scheme of each driver. It essentially allows collectors to see the new vehicles from the inside out.

Candy dubs them “digi-casts,” similar to digital versions of classic die-cast cars, and will sell the open edition NFTs for $50 each beginning February 15 and running through February 20, the date of this year’s Daytona 500 race. Owners of the NFTs for the top three finishers at Daytona will receive a free NFT after the race.

“Everything we try to do,” Candy Digital CEO Scott Lawin explained, “is through the lens of being a fan and a collector.”

Candy intends to release more NFTs in collaboration with the Race Team Alliance during the 2022 NASCAR Cup Series season, and it is investigating ways to improve the race day experience for holders who attend live events. In the future, the Candy Racing brand could be used for NFTs from other racing leagues, such as Formula1 and the Indy Racing League.

An NFT functions as a receipt or deed of ownership for a single digital item. Ethereum is the leading platform for NFTs, and the overall NFT market is expected to reach $25 billion in trading volume in 2021, up from around $100 million the previous year. Candy mints its NFTs on Palm, an Ethereum-based sidechain scaling solution.

Candy Digital has released a number of NFT drops with the Major League Baseball license, including digital championship rings based on the 2020 World Series-winning Los Angeles Dodgers, trading card-like packs, and stadium-themed collectibles. Candy’s approach to creating sports NFTs is reflected in the variety of designs and drops.

“Our general view is that there is no one-size-fits-all solution for fans, especially at the very early stages of the NFT market as a whole,” Lawin said. “We believe the best approach is to create a series of different products that appeal to collectors—casual fans, hardcore fans, and so on.”

Topps, a storied trading card brand, has its own NFTs running on the Avalanche blockchain, which Fanatics recently acquired (and previously on WAX). According to Lawin, the Topps deal has no immediate impact on Candy Digital’s own NFT play, but it does create options.

Some of the ideas that the Topps and Fanatics card teams have about how the traditional business can evolve is cause for excitement for future collaboration.

Candy Digital has a “full suite” of NFT products planned for the upcoming MLB season, as well as new releases in its Sweet Futures line of college athlete NFTs, according to Lawin. He teased additional sports partnerships ahead, as well, plus the company’s first entertainment partnership as Candy eyes expansion beyond its initial sports vertical.

Dapper Labs’ three marketplaces—NBA Top Shot, UFC Strike, and the upcoming NFL All Day—as well as efforts by Panini, OneOf, and Sports Illustrated, among others, compete in the sports NFTs market.

Candy’s diverse approach to NFT drops, as well as access to Fanatics’ 83 million customers and what can be gained with serving such a large audience, help set Candy apart from the competition, according to Lawin. Candy Digital, he says, also wants to tell stories with its NFTs and create an emotional bond with fans.