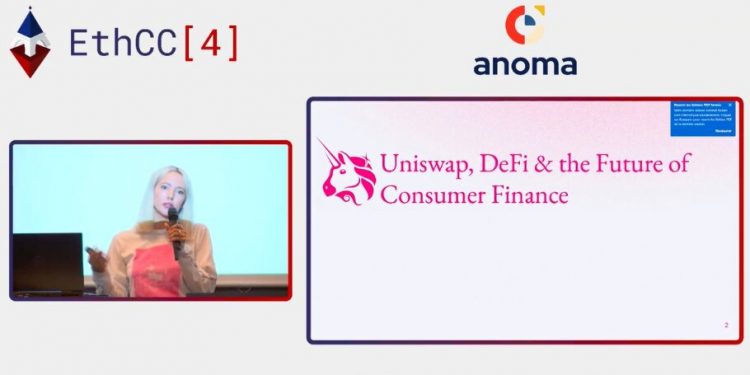 Is Uniswap In Talks With PayPal And Robinhood?

The biggest crypto DEX in the world, Uniswap, might be looking to reach a more mainstream user base according to a deleted video on Youtube at the EthCC convention in Paris at the end of July.

She then gave examples of these consumer finance services mentioning PayPal and Robinhood. She then said:

“We’re trying to put Uniswap and the rest of DeFi right there in those applications. The users are already using so we can bring the dream of open 100% up-time liqudity to the whole world.”

So, she didnt mention any details specifically about a partnership with any of these companies. However, she made clear that Uniswap wants to reach the consumers of PayPal. And the video was subsequently taken off of Youtube. So, now there’s a lot of publicity around the subject. But it’s unlikely that there is a serious discussion yet between Uniswap and these companies as the founder of Uniswap, Hayden Adams, said Uniswap requested the original video be deleted because it was misleading. He said:

“We thought [it] could be interpreted to suggest we have relationships that we don’t.”

Even though that’s the case, it is still interesting to examine the possibilities of Uniswap expanding to conventional consumer finance. So, that’s what we’re going to discuss here.

Will DeFi merge with traditional finance?

Uniswap mentioned that there will be procedures needed to be understaken in working with traditional consumer finance applications like PayPal. These large companies will insist that their customers are properly surveyed and KYC’d (Know Your Customer). Users of DeFi exchanges like Uniswap do not need to be KYC’d. All anyone needs is a MetaMask wallet and they’re free to trade without restrictions. If one thinks about it, this is an upside for DeFi because it makes users to the network more accessible which brings liqudity to the market.

Ashleigh mentioned that now well-known traditional consumer finance companies are easier to pitch to because they can see the value in DeFi. The DeFi space has exploded in the last three years and it’s no longer a secret. Goldmen Sachs is saying that Ethereum will out pace Bitcoin. But the answer to the question everyone wants to know is how DeFi will merge with traditional consumer finance?

For example, conventional exchanges struggle with liqudity and therefore pay a lot of money to market makers to keep liqudity in the exchange. When Uniswap was invented, it introduced a revolutionary concept. This is known as automated market makers. Instead of requiring a market of buyers and sellers to bring liquidity to Uniswap like traditonal makets, Uniswap employs AMMs which act permissionlessly to facilitate trades from liquidity provided by liquidity pools.

Liquidity pools are a reserve of tokens which are always on hand to ensure transactions on Uniswap can happen. On DEXs any token holder can join a liquidity pool permissionlessly. Will traditional consumer finance applications like PayPal requrie liquidity providers to be KYC’d? It’s likely.

It appears that in order for DeFi to become more accessible to users of mainstream consumer finance, they will have to sacrifice a form of decentralization. However, hopefully there is always a sector of DeFi that is unrestriced.