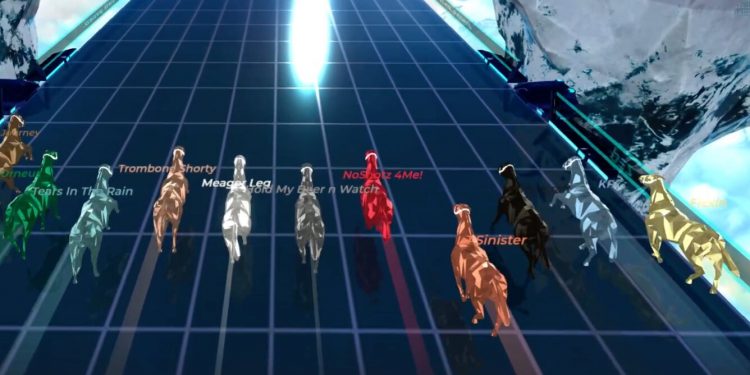 by Jay Speakman
in NFTs, Trends
Reading Time: 5 mins read
0
Share on FacebookShare on TwitterShare on LinkedinShare via WhatsappShare via Email

The Kentucky Derby may be the most well-known stakes race in the sport of kings, but it isn’t the only one. ZED RUN is giving average people the chance to breed, race, own, and sell digital racehorses.

A $2 entry fee gets your horse in the race

Every hour, seven days a week, ZED RUN, a digital horse racing platform, hosts such events. Owners may enter a horse for a nominal fee (typically in the range of $2 to $15).

In these online races, the horses are nonfungible tokens, or digital assets. You can’t pet or hand feed them. Like most NFTs, each digital horse is a “breathing NFT,” which means it can be kept as a collectible or sold for profit.

A racehorse with personality

“A breathing NFT has its own unique DNA,” said Roman Tirone, of Virtually Human “They have  a bloodline and a personality. They race, have genes, and are programmed so no two horses are alike.”

These steeds are definitely horses of a different color.

If you are wondering, yes, that means you too, can breed NFT horses on the ZED RUN blockchain. The best part is you don’t need to be rich to get started.

People, mostly crypto enthusiasts, are rushing to buy the limited-edition digital horses, which have sold for more than real horses. One player sold a digital racehorse stable for $252,000. A single racehorse recently fetched $125,000. The platform has sold over 11,000 digital horses.

Alex Taub, a Miami tech entrepreneur, bought 48 horses. “Most NFTs are bought and sold,” said Mr. Taub, 33. “With Zed, you can race or breed for NFT money.”

His stable is expanding. Taub’s five year old daughter just bred a digital horse. “She wants to race it,” he said. Gemstone had two foals named Rainbows and Sparkles. No word on how much was paid in digital stud fees.

Horse qualities and past performance

Every race features a 12-horse limit, with lineups reflecting each horse’s qualities and past performance. The site uses a 10,000-random-outcome algorithm to choose the race’s condition.

The races are streamed live on ZED RUN’s Twitch channel and website. ZED RUN also has a Discord server where people can discuss races, trade tips, and share data analysis tools. YouTube and Twitch users can livestream their own races.

Yair Altmark, a New York venture capitalist who has spent over $300,000 on digital horses says: “There are people who are becoming mini-influencers in this ecosystem.” Those who gain credibility on these streams and exposure on Discord are establishing themselves.

He expects to recoup a large sum. “I wouldn’t be surprised if some of these horses trade for $1 million in a few months,” said Mr. Altmark, 23. A buy-in race costs between $5 and $50, and you can race a horse as many times as you want.

Who can afford a real race horse?

Real horses are expensive to own and race. According to New York investor Drew Austin Greenfield, NFT horse racing has a lower entry barrier. According to Greenfield one can get in fairly cheap.

Renee Russo from New York City, says racing her digital horse, Glacial Planes, is more like playing a video game than gambling. “I own this horse, I’m not betting on another one,” she said.

Caution is advised as with any investment and if ZED RUN is a fad, these digital horses may be worthless.

Racing horses in a shared metaverse

The “metaverse” is a shared space where physical and virtual reality collide. Mr. Greenfield believes ZED RUN will be the first digital sport of the metaverse. “People will root for and support horses and stables. There are horses that are already eco-celebrities. It’s global, 24/7, and no language barriers.”

ZED RUN is rapidly expanding as the NFT craze grows and more people discover digital horse racing. They have 30 employees globally and plan to keep hiring. Celebrities and athletes have recently started investing and social media is starting to take notice as well. ZED RUN’s Instagram account has over 8,000 active followers.

This is about to get real

People have expressed interest in real-life spectator sports because of ZED RUN. “I would never have watched a real horse race on YouTube before, but now I’ve watched five,” Mr. Altmark said.

Mr. Taub is betting big on digital races. He plans to expand his stable with the next ZED RUN drop. He also realizes the risk involved but likens it to real-life horse betting.

With the success of ZED RUN can other virtual sports where gamers can create and trade players be far behind? It is safe to assume that the Premiere League, NFL and NBA are exploring ways to have fans interact and compete 247 / 365 by owning their own digital teams on the blockchain.

If you liked this article you might also like to read: NFT Madness: Pudgy Penguins push Punks and Bored Apes out of top ten.