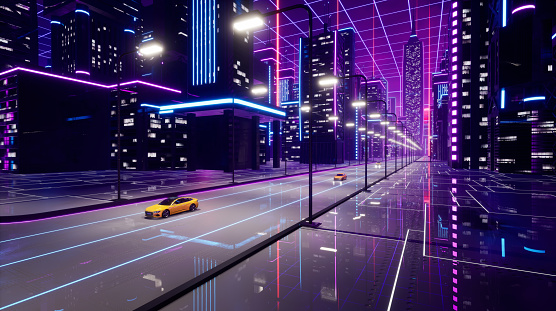 In the near future people may work, shop, play and live in metaverse worlds. Image: iStock/ Getty Images

by Jay Speakman
in Metaverse
Reading Time: 10 mins read
0
Share on FacebookShare on TwitterShare on LinkedinShare via WhatsappShare via Email

A few decades ago, the metaverse was something that could only be found in science fiction films and books. These days, however, the metaverse is in the process of being developed and is well on its way to transforming the internet. Taking all of this into consideration, you might be asking whether or not the metaverse will eventually entirely replace the internet.

The short answer to this question is no.

Will the metaverse eventually become a replacement for the internet?

When one considers the sheer number of individuals who use the internet on a daily basis, it is impossible to deny that the very idea of the metaverse conjures up feelings that are equal parts thrilling and potentially unsettling. On the other hand, you have no reason to be concerned because the metaverse is not going to take the place of the internet; rather, it is an expansion of the internet.

There are real concerns however, as to who will control the metaverse but that is something we’ll touch on in another article.

We are confident in asserting that the metaverse will never totally supplant the internet. In the same way, despite the widespread adoption of social media, the internet has not been completely supplanted by social media. Having said that, the metaverse does have the potential to totally transform the way in which we utilize the internet, which is an extremely exciting prospect.

What impact will the metaverse have on the internet?

The incorporation of Artificial Intelligence (AI), Virtual Reality (VR), Augmented Reality (AR), and Extended Reality into the internet will usher in the era of the metaverse, which will revolutionize the internet (XR).

As a consequence of this, this technology will have an impact on our economy as well as our day-to-day lives across all sectors. The metaverse will, above all else, alter the ways in which we communicate with one another and the ways in which we use products and information.

It is necessary to examine how the internet has developed up to its current state in order to completely appreciate how the metaverse is going to alter the internet and how it will affect its future.

The initial stage of the internet was referred to as Web 1.0, which was also known as the syntactic web. Web 1.0 restricted users to only being able to access material that was produced by content producers. Other than consuming the content that was made available to them, customers have no other choices for providing feedback or interacting with the company. Pages that do not change over time and personal websites are also examples of Web 1.0.

Web 2.0 is what people use today for everything from shopping to posting to their Instagram account. This stage of the internet’s development, which facilitates interactions between internet users and platforms and is sometimes referred to as the Social Web and the read-write web, makes it possible for all of us to speak with one another.

Naturally, the proliferation of content producers and content that is shared across many online platforms is one of the results of the advent of Web 2.0. The development of internet technology made it possible for both individual brands and large enterprises to flourish to an extent that had never been seen before.

This was made possible by a significant increase in both their audience and their capacity to communicate with one another.

The development of these social platforms was made possible by technological advances such as HTML5, CSS3, and Javascript. These developments not only made it possible for new businesses and startups to innovate, but they also opened up a variety of doors for people in general, not just for the people who developed the platforms. Facebook, YouTube, Twitter, and Instagram are just some of the most well-known examples of Web 2.0 applications.

Now, let’s talk about Web 3.0, also called Web3 and the Semantic Web. The next stage of the internet, which is now being investigated by us, is as follows. Through the implementation of Artificial Intelligence (AI) and Machine Learning in this era of the internet, computers are able to analyze data in a manner that is comparable to that of humans (ML).

The utilization of AI and ML helps to disseminate content in a manner that is customized to the particular pursuits of a user, which ultimately results in a more individualized and satisfying experience when using the internet. Blockchain, non-fungible tokens (NFTs), smart contracts, and of course the metaverse are just some of the completely new platforms and technologies that will be introduced with Web3.

After learning how far the internet has progressed, we hope this explains to you why the metaverse won’t take the place of the internet but rather will just improve the user experience. The metaverse will have the same transformative effect on how humans make use of the internet that social media platforms like Facebook and YouTube have already had.

Everyone is aware of the enormous impact that social media has had on the world. Imagine for a moment that social media existed in a fully immersive virtual environment, one that was teeming with dynamic avatars and digital objects that users could purchase, sell, own, and even build. Now think about how that might work.

Instead of looking at words and films on a screen, we will be able to interact directly with digital representations of real-world people, goods, and happenings. We will use an avatar that stores all of our information as well as our full online reputation rather than creating a social media profile. This avatar will replace our social media profiles.

This indicates that we are free to experiment with various platforms while still preserving our reputation in every location we go. You should prepare yourself for this because it  may represent the future. Your reputation will follow you wherever you go in the metaverse, just like it does in the real world, because Web3 is predicated primarily on the idea that online interactions should be open and honest.

In addition to a few of the fundamental ideas, the metaverse is likely to bring about a complete and utter transformation in every industry of our economy. The metaverse will have a significant impact on many different industries, including retail, entertainment, manufacturing, medicine, education, content development, telecommunications, and even travel.

For instance, instead of selecting what clothing we want to buy by looking at an image, we will be able to try on the clothing in a virtual environment using our avatar. This will allow us to make more informed decisions about what we want to purchase.

In addition, not only will you receive the actual goods in its physical form, but you will also be given an NFT, which is a digital copy that serves as a representation of the actual product that you have purchased.

The non-fungible token (NFT) not only serves as evidence that you made a purchase, but it also accrues value in the metaverse over time. This value, in turn, can be exchanged for fiat currency via NFT marketplaces.

There are several companies, like Nike, that have already begun investigating this idea. The launch of Nikeland by Nike is a virtual store that has been developed inside of the Roblox game. This store gives you the ability to purchase virtual items that have been created by Nike, which you can then put on your avatar.

In addition to all of this, the metaverse will alter our lives in a variety of different ways on a day-to-day basis, from how we shop, learn, communicate and consume content.

Will the metaverse make the internet a better place to visit?

The metaverse will drastically improve the experience of using the internet, but it will not make the internet itself more advanced technically. Due to the fact that the metaverse is built on top of the internet, it serves more as an additional benefit than it does as an overall improvement to the internet’s functionality.

However, this does not negate the fact that the metaverse will significantly enhance the user experience of internet users. Before the advent of social media, the internet was somewhat simplistic; despite its allure, it was unable to fulfill many users’ desires to interact with people and share their perspectives because it did not have the capacity to provide such a platform.

When Web 2.0 was finally finished being developed, it completely altered the way that the internet was used, for the better.

Since the first release of Web 2.0, a great number of people have found that they can make a solid income by utilizing various online platforms, and some have even found that they can utilize it to expand the reach of platforms that they already have in the physical world. The same thing will happen in the metaverse, but perhaps to an even larger degree than social media has already achieved.

The more effectively we are able to engage with people from other parts of the world in a genuine and open manner, the more probable it is that we will use whatever it is that gives us the ability to do so, which will soon be the metaverse. How soon?

We can’t say. Yet, we would see enormous development within the next 5 to 10 years, and maybe much sooner, based on how fast the technology is spreading.

However, the amount of time that it takes for the world to grasp what is going on and the tremendous potential that the metaverse presents to users of the internet might take longer.

You can’t ignore the reality that the internet is continuously changing and will continue to change and the metaverse will be a big component of this ongoing evolution of the internet.

When it comes to the development of the internet and the new technology that surrounds it, it can be difficult to wrap one’s head around everything that is taking place. When considering the metaverse, it is important to keep in mind the following main takeaways.

The functionality of the internet will not be improved by the metaverse; but, the user experience will be significantly enhanced by its introduction, widespread adoption and those brave enough to build in this new world.

Grayscale to Dump All Their Airdropped ETHW Tokens

Is Web3 the Next Internet Platform?

The next generation of the Internet platform is on the way. In fact, it's being built right now. Big corporations...