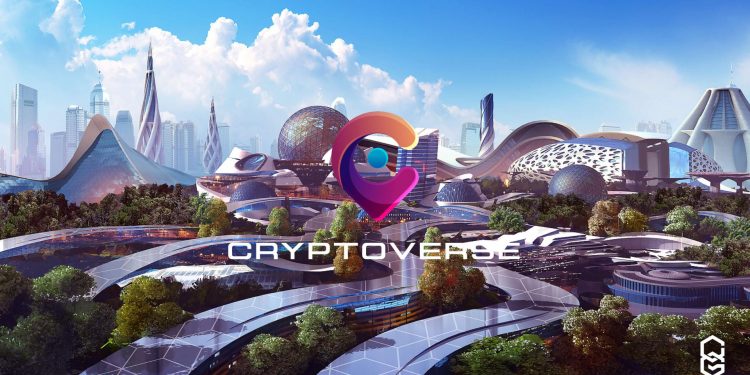 The team behind ChainGuardians, a player-driven play-to-earn RPG game, is launching The Cryptoverse to create the ultimate metaverse that will bring blockchain gaming to mass adoption.

The Cryptoverse is a 3D virtual world built with Unreal Engine 5, one of the most advanced game engines available on the market. Cryptoverse aims to join businesses and players into one interlocked ecosystem, giving value to both sides. As a proper metaverse, Cryptoverse will feature its unique social mechanics including different social layers, gamification mechanics, as well as assets that can be owned by players: avatars, vehicles, buildings, land plots — all powered by interoperable NFTs.

The Cryptoverse is composed of an archipelago of eight islands, each representing a different Zone.

Each Zone has its unique aesthetic feel tailored to its community. Starting from some initial point, the players and inhabitants of each Zone are free to customize it to their liking, creating an organic and ever-evolving virtual world. There is also a center Zone, called The Hub, which will be the gathering place for all Cryptoversians. Styled with a cyberpunk theme, The Hub will be the melting pot for all other Zones and feature a unique, neon-infused and fluid environment.

The strength of the Cryptoverse lies in its impressive technical realization. Using Unreal Engine 5, a game engine that is bordering on true photo-realism, the Cryptoverse will be unlike anything that preceded it. The platform will also feature VR, AR and XR experiences powered by the latest technology and the top cinematic artists from word-class studios.

For builders, there will be advanced Dual Architecture SDKs to implement their animations and effects, while customizing the in-game world can be done with both no-code tools and an advanced modding SDK for the technically-savvy community. On the social layer, each LAND will offer maximum flexibility by leveraging NFT sharding and combination capabilities, as well as unique social engagement opportunities like the Prana system (a karma-based reputation system) and LAND clearing incentives.

Cryptoverse is soon launching a pre-sale for LAND inside The Hub and other zones, offering a 10% discount when purchasing from partner launchpads and NFT marketplaces. Cryptoverse will be governed by the CGG token used on ChainGuardians, giving continuity to the two ecosystems.

“The Cryptoverse is an immersive 3D virtual world built in Unreal 5 which is underpinned by blockchain technology. Within the Cryptoverse, users will be empowered to create, own LAND, govern and monetize experiences using CGG, the token which also underpins the ChainGuardians and ChainBoost ecosystem.” — Robbie Cochrane, Co-Founder of The Cryptoverse.

The Cryptoverse is a 3D virtual world that is built in Unreal Engine 5, one of the top game engines available on the market. Within The Cryptoverse, users can maintain provable ownership of their virtual space, also known as LAND, represented as an ERC-721 token or Non-Fungible Token (NFT). Ownership of users’ NFTs will be manifested through the Ethereum blockchain, and will include advanced concepts such as NFT sharding and combination. The Cryptoverse is a social phenomenon foremost, offering players a chance to join new social circles in the Metaverse and acquire reputation within this exciting new world.