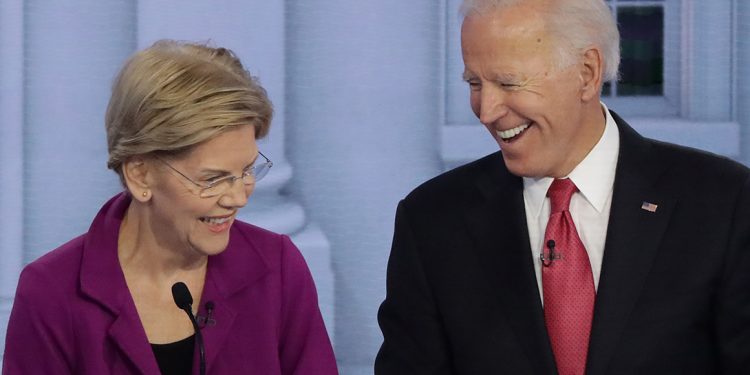 by Jay Speakman
in Bitcoin News
Reading Time: 8 mins read
0
Share on FacebookShare on TwitterShare on LinkedinShare via WhatsappShare via Email

Can Crypto Escape Being Owned By The Banks It May Replace? Don’t Bet On It.

Did you really think that the corrupt worldwide banking system and the governments they finance were going to let Bitcoin and stablecoins replace them? Really?

In 2021, crypto enthusiasts became convinced that the US government is out to get them. Now those fears seem well-founded and not without reason: a string of decisions by the SEC and other regulators suggested that federal officials aren’t just apathetic toward the industry, but actively hostile to it.

If Not Now, When?

While many crypto supporters claim that the government is corrupt or inept, the reality is that the Biden Administration is pursuing a deft strategy to tame an industry that it regards as a threat.

Interviews with former regulators and executives from top crypto firms reveal a sophisticated plan to take over crypto by handing over a key component of the crypto industry—stablecoins—to the big banks. Regulators believe that doing so now will bring the free-wheeling crypto economy to heel. After all, there are trillions of dollars to be made and the banks want to be the ones making it.

“It’s a very well-thought-out doctrine about how to keep the crypto industry from growing too fast and too much,” Maya Zehavi, a crypto entrepreneur and investor who has advised regulators, says.

Who Came Up With This Plan?

While many see Gary Gensler, the ambitious SEC Chair, as the architect of the Biden Administration’s anti-crypto policies, his influence has been exaggerated. Instead, it appears that Treasury Secretary Janet Yellen, Senator Elizabeth Warren, and a group of Federal Reserve veterans are in charge.

According to Zehavi and others, the Biden Administration does not intend to eliminate stablecoins entirely. Instead, the goal is to eliminate “shadowy” operations like Tether while bringing “regulator-friendly” ones like Circle and Paxos under the auspices of the US banking system.

Recent regulatory actions indicate that the plan is already in place. The question now is whether the crypto industry can avoid being owned by the same large banks that it was designed to disrupt.

Stablecoins: The Key to a Crypto Takeover

Bitcoin was created in 2008, but it took more than a decade for the US government to take cryptocurrency seriously. It was due to stablecoins that it happened when it did.

The announcement by Facebook in 2019 that it would launch its own digital currency was a watershed moment, according to the non-profit Coin Center. The currency, originally dubbed Libra, would be a stablecoin pegged to a basket of government-issued currencies, according to the company.

Facebook was not the first to come up with the concept of a stablecoin. Crypto users have relied on digital tokens pegged to so-called fiat currencies such as the US dollar or the euro since 2014. However, when Facebook announced that it would offer a stablecoin to its more than 2 billion users, Congress sat up and took notice. The company’s cryptocurrency ambitions represented more than just a new product; they also posed a challenge to governments’ power over the purse. “If Facebook raised an army, this would be only slightly more hostile to the people of the United States,” crypto lawyer Preston Byrne wrote at the time.

Stablecoins have yet to enter the mainstream, but they have become an important part of the crypto industry. Tokens such as Tether’s USDT and Circle’s USDC provide a hedge against volatility while also allowing traders to avoid the fees associated with converting money back to traditional currency. It also doesn’t hurt that stablecoins make it easier to avoid the tax and legal regimes that kick in when a customer crosses so-called “fiat rails,” where traditional banks operate.

All of this comes as the US Treasury has grown wary of challenges to its sovereignty, such as efforts by geopolitical rivals Russia and China to undermine the dollar’s role as the world’s reserve currency. While China has promoted the digital yuan as one alternative, America’s adversaries would be just as happy if Bitcoin or another cryptocurrency replaced the dollar in global commerce. These geopolitical considerations help to explain Facebook’s Libra project’s backlash (and to crypto writ large).

The political backlash effectively killed Libra, but the broader stablecoin market is still thriving. Today, its market cap is around $155 billion, and stablecoin trades account for more than 70% of all crypto transactions on any given day. And it’s possible that this is just the beginning. Circle, the second-largest stablecoin issuer, told its investors in July that the value of USDC in circulation could reach $194 billion by 2023—an amount equal to Greece’s GDP.

Circle, which is affiliated with cryptocurrency behemoth Coinbase, has long emphasized its efforts to stay on the right side of regulators, even as it has been embroiled in an SEC investigation and controversies over its reserves.

Tether has been dogged by more serious allegations of questionable accounting practices, as well as questions about whether some stablecoins are even backed by dollars at all.

As a result of all of this, stablecoins have emerged as the primary target of the federal government’s belated attempt to regulate the crypto markets. A January report from the Federal Reserve discussed the possibility of a central bank digital currency, but concluded that the Fed would not act without a clear mandate from Congress and the White House.

Far more significant was a November report issued by the President’s Working Group, an inter-agency group composed of the country’s most senior financial regulators, including Yellen. The document, titled “Report on Stablecoins,” urged Congress to pass legislation requiring stablecoin issuers to operate as banks and to limit their “affiliation with commercial entities.”

The report also stated that regulators may label stablecoin issuers as “systemically important,” a designation created in the aftermath of the 2008 financial crisis to oversee institutions that are “too big to fail.”

Few people believe the authors of the report are serious about treating stablecoins as too big to fail. Stablecoins, unlike the massive insurer AIG, which falls into that category, are not intertwined with the rest of the US financial system.

According to non-biased data, the $155 billion stablecoin economy is a drop in the bucket when compared to money market funds, which are now worth nearly $5 trillion and have been a catalyst in previous financial crises.

The Biden Administration intends to exert control over the stablecoin market—and potentially the broader crypto industry—via the Federal Reserve and two of its sister banking agencies: the Office of the Comptroller of the Currency (OCC) and the Federal Insurance Deposit Corporation (FDIC), both of which have enormous authority over the country’s banks.

“There are many ways these banking regulators can strangle crypto if they impose all of these requirements from the traditional banking space into the crypto space,” says Mary Beth Buchanan, a former US Attorney who is now the top lawyer for crypto forensic firm Merkle Science.

The Fed’s treatment of Kraken and Avanti, two crypto companies that have obtained state banking charters in Wyoming, is early evidence of the Fed’s anti-crypto stance. The firms applied for a so-called master account at the Fed more than a year ago, which is required for federal banking operations, but the Fed has so far refused to process them. Fed Chair Jay Powell recently justified the delay by citing the Wyoming firms’ applications as “novel” and “precedented.” Wyoming Senator Cynthia Lummis has argued that the agency’s inaction is both harmful and illegal.

Meanwhile, the OCC has denied applications from other crypto companies for federal banking charters, which would allow them to obtain FDIC insurance, ensuring that traditional financial institutions, not crypto ones, are the only ones that can conduct day-to-day banking.

As a result, banking regulators are poised to achieve their goal—forcing stablecoins into the corrupt banking cabal—but without providing crypto companies with a seat at the table.

People often ask why the world is the way it is, with so much wealth concentrated at the top 1/10 of 1 percent, stifling regulation, confiscatory monetary fees and the inability to move money digitally without paying through the nose. It’s the way it is because the institutions that control money and governments want it that way and they are bent on crushing any technology or innovation that threatens their primacy.

“They’re just going to hand this over to the big banks,” says one former Wall Street executive who now runs a cryptocurrency company. “It’s a total JP Morgan snow job.”