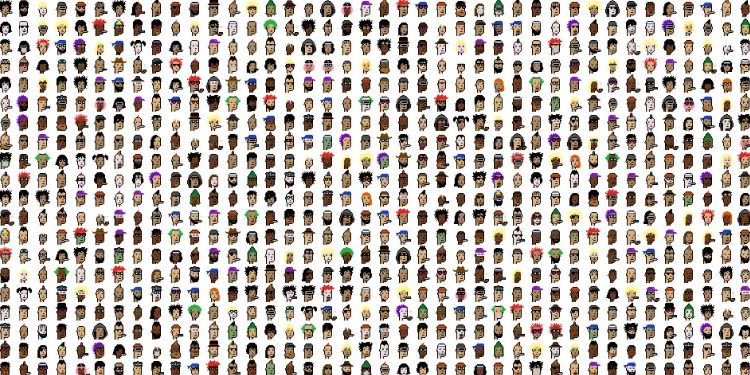 A rare “alien” CryptoPunk (pale and sporting a headband) NFT has been listed for sale for $90.5 million, which if accepted would make it the most expensive CryptoPunk NFT ever sold.

According to Larva Labs (creators of CryptoPunks) “CryptoPunk 3100” is up for grabs in a buy it now situation. One of nine aliens, the Punk is identifiable by his headband, pale skin, and vacant gaze.

This particular Punk was previously sold for $7.6 million at a public auction.

CryptoPunks, stored on the Ethereum blockchain, are a collection of 10,000 pixelated faces. Apes, extraterrestrials, humans and zombies are among the avatars for sale. Some wear hats, headbands or sunglasses. Others feature cigarettes or pipes dangling from slack jaws.

NFTs, also known as non-fungible tokens, are digital tokens that are one-of-a-kind and can represent photos, audio, or video content.

These CryptoPunks are some of the most valuable NFTs available. According to the NFT tracker CryptoSlam, there were 1,395 sales in July worth a total of $135 million (all paid with ETH). The average selling was slightly shy of $100,000, which was significantly higher than the typical sale for most NFT projects.

Indeed, the listing may serve as an example of the exorbitant prices that some Punks and other NFTs have fetched to this point in time. With only two zombie punks now on the market for sale and the most recent sale occurring four months ago, zombie punks are a relatively uncommon sight.

Previous sales records include this “CryptoPunk 3100” and another extraterrestrial, both of which sold for $7.6 million. Apart from that, a gorilla was sold for $5.4 million and another ape was sold for $3.7 million to entrepreneur Gary Vaynerchuk. Imagine what those funds, donated to preserve real gorillas, could do.

The three following-largest sales were for zombies, with prices ranging from $1 million to $2 million.

Someone Dropped $5.5 Million On 88 Punks

Just yesterday, an unidentified investor spent $5.5 million on 88 CryptoPunks, which he acquired in a single burst of activity. This individual, or group has risen to become one of the top twenty largest CryptoPunk investors.

It should be noted that they purchased these CryptoPunks with MiningDAO, a protocol that works in a similar way to Flashbots. This allowed them to contact a miner and have the transaction included in a block without having to broadcast it to the rest of the network first, as was the case previously.

Therefore, they were able to avoid merchants boosting their pricing once they saw sales were pouring in. The investor thanked the miner for their assistance with a 5 ETH tip, which was worth approximately $12,000 at the time.

After the $5.5M buy, the investor established a Twitter account and completed a transaction to establish themselves as the legitimate owner of the Ethereum address that acquired the Punks.

For those seeking  a digital asset that isn’t based on fundamentals but instead has creative and collection value, CryptoPunks and similar NFTs are becoming recognized investment instruments. And CryptoPunks are can now even be rented for a certain period of time.

What Is DEXtools? – Everything You Need To Know

Gold vs. Bitcoin: Where Should You Invest?