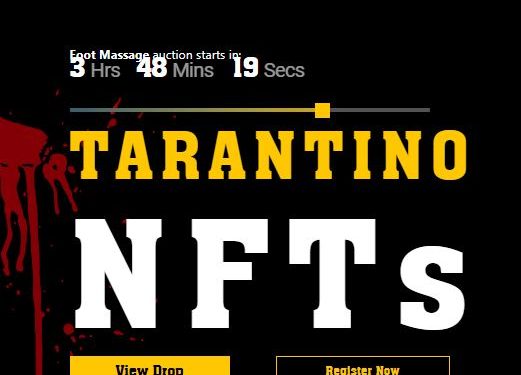 Tarantino finally released his unpublished handwritten screenplay pages as NFTs, and Miramax is suing him again. The case regarding NFTs in Tarantino’s case is that only the owner can see the scenes’ content.

The decision by Quentin Tarantino to become among the first screenwriters to join the booming NFT bandwagon has put him into legal trouble. The legal dispute follows Tarantino’s decision to make good his threat to go on and make his unpublished handwritten screenplay pages into NFTs on January 17th in collaboration with Secret Network. As Tarantino sticks to his plan to release the NFTs, Miramax wrote to Zyskind and Secret Labs stating:

“Regardless of the limited rights that Mr. Tarantino has to publish scripts, they do not allow the production of unique NFTs associated with Miramax’s intellectual property, and its opposite position is the subject of a pending lawsuit […] what you refer to in your press release as a ‘never-before-seen handwritten script’ by Mr. Tarantino may not yet be ‘iconic’ or a ‘fan favorite,’ so it’s obvious that you and Mr. Tarantino are trying to capitalize on Miramax’s content, intellectual property rights, and brand.”

Miramax wants to “spoil the party”

Tarantino’s 1994 Oscar-winning film “Pulp Fiction” made him famous and changed the entire film industry from the ground up. The film that made independent studio Miramax famous has come back to haunt Tarantino 28 years later and made another history of sorts.

The unique feature of the Secret NFTs in Tarantino’s case is that only the owner can see the content of the scenes. And so you can listen to the director’s audio commentary, which has never been heard before. All in all, this sounds like a great use case of NFTs for any movie fan, but Miramax wants to “spoil the party.”

Who has the rights over the material?

NFTs have been the buzz since 2021 in the crypto sphere and beyond as celebrities the world over scramble for a piece of the pie. Celebs developed a particular appetite for CryptoPunks before the famed Bored Ape Yacht Club conquered the imagination. NFT profile pictures are the new status symbol as actors, athletes, and celebrities join the bandwagon, raking in over $10.7 billion in Q3 2021.

The response from the CEO of the Secret Network most likely speaks for many users in the crypto scene, especially regarding the question of who between the creator and the copyright owner has the right over their material. Mr. Pink, a character from Tarantino’s film Reservoir Dogs:

“I don’t wanna kill anybody. But if I gotta get out that door, and you’re standing in my way, one way or the other, you’re gettin’ outta my way.”

The CEO reiterated that anyone who wanted to ensure that an NFT came from Tarantino could check here. One thing is sure: the whole process and the attention will not have harmed the price. Currently, thousands of people have already registered for the auction of the 7 NFTs.