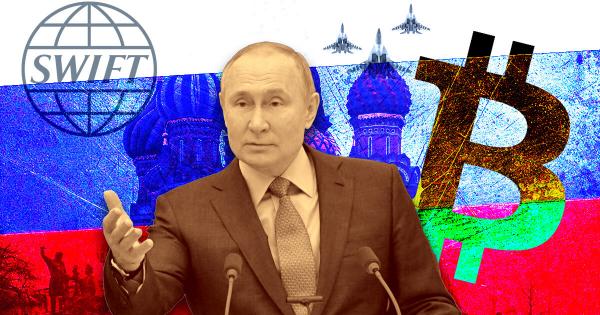 What most people don’t realize is that crypto, be it Bitcoin or Ethereum, is a terrible tool for evading sanctions and hiding money.

In direct response to Russia’s horrific invasion of Ukraine, the United States has imposed harsh economic sanctions on the Russian government (including President Vladimir Putin), oligarchs in Putin’s circle, and Russian businesses closely associated with the Kremlin.

However, shortly after these sanctions were announced, Sen. Elizabeth Warren (D-MA) retweeted a New York Times article claiming that cryptocurrencies could be used to circumvent US sanctions.

After which, in a letter to the Treasury Secretary on March 2, Warren called for increased “scrutiny” of digital assets, joining those who claim crypto and decentralized finance provide Putin with a way around US sanctions.

Why Crypto can’t be used to Escape Sanctions

To be used as a tool for sanctions evasion, digital assets must allow US citizens to transact with sanctioned entities without incurring consequences or exposing their activity to law enforcement.

Despite ongoing efforts and intense scrutiny, the traditional financial system has never come close to completely prohibiting the use of financial services by illicit actors. According to estimates by the US government and others, the illicit economy is massive, totaling well over a trillion dollars and dwarfing the amount of illicit financial activity actually disrupted by law enforcement.

Yes, cryptocurrencies can be used for illegal financial activity, such as sanction evasion. However, digital assets are more difficult to exploit for illicit purposes at scale than the traditional ecosystem.

The Transparency of Blockchain

Why is this the case? The answer is related to how transaction information in peer-to-peer digital asset transactions is stored. Transparent blockchains, in particular, create a permanent and immutable record of transactions.

There are numerous examples of how this transparency misleads criminals. In recent weeks, two of the largest cryptocurrency hacks in history, the Bitfinex hack and The DAO hack, have been solved by analyzing on-chain data.

Those hacks happened years ago, and the data needed to track down the hackers has been publicly available to law enforcement—and anyone else with an internet connection—ever since.

Furthermore, software tools for analyzing this massive amount of on-chain data are becoming increasingly sophisticated. These tools are already being used by cryptocurrency businesses, as is the Department of Justice, which recently announced the formation of a cryptocurrency enforcement unit.

The government is already on the lookout for crypto-based illicit financial activity, including sanctions evasion, and has become quite adept at doing so. To summarize, sanctions compliance is alive and well in the cryptocurrency world.

If Senator Warren and other Congressional leaders are truly concerned about cryptocurrency facilitating large-scale sanctions evasion, there are steps they can take to prevent this from becoming a reality. The most important of these is ensuring that crypto networks and decentralized finance can flourish in the United States.

Congressional leaders should stop speculating without evidence about how criminals could use cryptocurrencies to avoid US sanctions and instead express their support for the crypto industry’s already extensive sanctions compliance efforts and help to improve them.