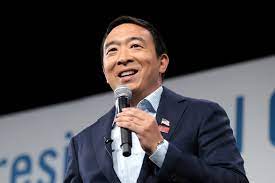 NFT’s are making their way into the world of politics. The American politician, entrepreneur, and founder of the Forward Party, Andrew Yang, plans an NFT collaboration with decentralized project DAO. Proceeds from the NFT sales will go towards building the Forward Party.

The 2021 New York City Democratic mayoral primary candidate said his party should be deeply connected with the American crypto enthusiasts. According to Yang, his party would seek to “reform the dysfunctional duopoly: in the American political system. He revealed he would use the NFT collaboration with Bankless project DAO to fund his political party.

Talking to Ryan Adams and David Hoffman in a recent podcast, Yang stated that he wanted to “make the Forward Party the ‘crypto party’” because he feels the two are strongly aligned. Yang said:

“I want to make the Forward Party the Crypto Party, truly, because I see the alignment as very, very deep. The parallels are so strong, where you have this system, you can say the political or the financial system, and you see that it’s failing and failing in its various ways, and then you say ‘OK, maybe we can do better.’”

According to Yang, the current political system was failing and flailing and needed upgrading and modernizing. Bankless co-founder David Hoffman said to memorialize the occasion, nothing but the best of all crypto methods would suffice. Hoffman said:

“We thought that that was a big enough deal to do some sort of historical commemoration […] and what else would that be other than an NFT!”

Forward NFT proceeds will be donated to the Forward Party

The Bankless team contacted artist Crypt0xWife, who has created illustrations of Bankless memes in the past, to see if she’d be interested in joining the project. Hoffman added that there is a lot of alignment between Yang’s vision for the world and what crypto has to offer—and that many of his policies would thrive under a crypto paradigm. Hoff man added:

“Andrew understands crypto much deeper than the typical politician and understands that a lot of value and jobs are going to be created here […] the man is pro-innovation, and what industry has more innovation in it than crypto?”

Andrew Yang said on Twitter that all proceeds from the sale of the NFT, called Forward NFT, would be donated to the Forward Party. The Forward NFT can be minted on Ethereum and listed on the Zora NFT marketplace.