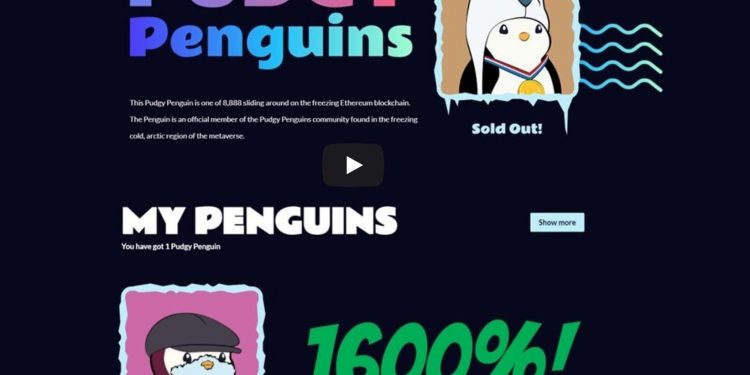 Do you want to know which NFT collectibles series are currently in high demand? It’s simple: just go to Crypto Twitter. You’ll find CryptoPunks (one was recently listed for $90M) as well as the Bored Ape Yacht Club avatars, among others. And the most recent NFT hype is called Pudgy Penguins.

You can now add Pudgy Penguins to the list of reasons you should have paid more attention in art class.

Pudgy Penguins don’t exactly break the mold when it comes to Ethereum-based NFT settings. There are a total of 8,888 of them, each portraying a different cartoonish penguin created from a set of randomized attributes. Some wear caps or glasses, have a mohawk or bowl cut, and wear a t-shirt or scarf. You may notice a penguin sporting a viking helmet or a top hat.

It’s similar in approach to the aforementioned sets, but with a more wholesome attraction. Yes, if you have kids they will no doubt soon be clamoring for their own Pudgy Penguin.

But, like previous sets, they’re flying off the shelves. The original batch sold out rapidly, and the NFTs were all minted around three weeks ago, but they’ve only recently become popular on Twitter. This past week, Reddit co-founder and crypto fan Alexis Ohanian tweeted his Pudgy Penguin, which seemed to confirm that the collecting mania was catching fire. A New York Times report on these penguins just reinforces that.

An NFT serves as a deed of ownership to almost any type of digital property, whether it is an image, video file, video game item, or something altogether else. The broader NFT industry burst early this year, with a total transaction volume of $2.5 billion in the first six months of 2021.

While some of the market’s enthusiasm has died down in recent months, transaction volumes have recently increased. After breaking the $100,000 mark for the first time last week, the floor price for CryptoPunks has recently hovered around $150,000 worth of ETH, and there have been a few multi-million-dollar sales in that collection recently. Meanwhile, the newer Bored Ape Yacht Club sold its first NFT for more than $1 million over the weekend.

According to CryptoSlam, Pudgy Penguins transaction volume has reached $11.8 million in ETH in the last 24 hours, a significant new high for the collection. It’s a significant bump over the approximately $3.6 million in purchases over the previous 24-hour period, and it puts Pudgy Penguins ahead of CryptoPunks ($7.6 million) and the Bored Apes ($2.1 million) on the last day of sales.

As one might assume, increased demand for Pudgy Penguins is driving up their price. As of this writing, the floor on the secondary market OpenSea is 2.3 ETH, which means the cheapest one you can buy right now is little more than $7,000. It was 1.85 ETH (about $5,700) earlier this afternoon. The buzz is real, and the market is reacting accordingly.

Vietnam is First among 27 Leading Countries in Cryptocurrency Adoption