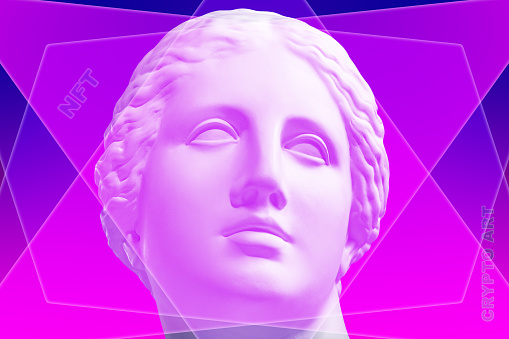 NFT DAOs: How Do They Work?

by Jay Speakman
in NFTs
Reading Time: 6 mins read
0
Share on FacebookShare on TwitterShare on LinkedinShare via WhatsappShare via Email

This post will help you understand NFT DAOs, which are DAOs focused on purchasing or managing an art portfolio predominantly composed of Non- Fungible Tokens.

What exactly is a DAO?

Like other organizations, DAOs (Decentralized Autonomous Organizations) follow a set of rules. Yet, unlike centralized organizations, DAOs don’t rely on third-party trust. DAO contracts are immutable, and cannot be changed. DAOs add a layer of transparency to the system, allowing people to organize into groups working towards a shared vision without the need for a centralized authority.

Let’s take a look at how DAOs work with NFTs and specifically with art NFTs, which represent the current majority of the NFT market.

The cryptoverse in 2021 saw an increased interest in blockchain art, specifically NFTs. The spring of 2021 saw the emergence of an ape-fueled NFT euphoria as the demand for blockchain art skyrocketed. Despite the fact that the hoopla has subsided (somewhat), NFTs appear to be here for good, offering unique entée into art ownership.

Traditionally, the art industry didn’t permit the sharing or co-ownership of works of art. The idea of a “tokenized” Picasso was unheard of. How would one go about chopping up a masterpiece into bits and selling it?

Now, the practice seems practically de rigeur. Art can be created as an NFT, sold as a one of a kind original or digitally fractionalized into shares and sold to investors.

Creatives can now organize themselves towards win-win outcomes cloaked in anonymity through the beauty of blockchain technology. Turns out it is easier to construct a secure and transparent framework for digital artwork co-ownership rights when you don’t have to rely on trusted third parties.

As blockchain technology allows tokenization of nearly everything from physical products to intangible art and collectibles, the barriers to ownership and participation have been greatly democratized via digital assets.

The blockchain gives artists signature rights with a unique piece of code, allowing them to secure ownership rights and prevent further duplication. While art NFTs are more widely available through tokenization, that isn’t to say they are necessarily inexpensive.

Few people can afford to shell out thousands, let alone millions, on artwork in order to win a bidding war over the latest Bored Ape or pipe-smoking CryptoPunk.

DAOs can ameliorate this by allowing plain folks to band together to purchase high-value NFTs.

Rarible bills itself as the world’s first “community-owned NFT marketplace,” and it uses its RARI token to fuel its community-run platform concept by rebranding as a DAO.

As a result, Rarible platform users are granted the right to participate in protocol governance. This means that as a community, they can propose platform enhancements and change existing standards. RARI is the native token that underpins the DAO’s implementation.

It cannot be purchased from the platform and must be acquired by participating in platform activities such as purchasing and selling artwork and other collectibles.

This is referred to as Marketplace Liquidity Mining.

The possession of RARI confers various rights on the user. Aside from system updates, RARI holders can also participate in Rarible’s community-based platform moderation. The token is also used to curate the art that is promoted on the platform. The community can vote on which artwork should be included in the weekly elections, giving their reach an added boost.

The DAO is governed by each voter having their own individual voting NFT called MINT, with each MINT containing the number of votes that each person possesses. They can trade their MINTs on all NFT marketplaces like Opensea, Mintable (naturally), and Rarible, but they can also earn MINTs through yield farming.

Every time a transaction takes place on the Mintable marketplace, both the buyer and seller receive votes added to their NFT, or a newly minted NFT if they do not already have one. According to Zach Burks, the founder of Mintable, “a new DAO like this enables for a type of yield earning and decentralization – where the users that utilize the site the most, have the most voice in its governance and gain the most out of it.”

The advantages of not using an ERC-20 token for governance can be substantial.

By employing NFTs, governance voters are not considered investors, there is low risk, rug pulls are not possible, and voting is managed by users who are actively connected with the platform. Juxtapose this to what happened when a flash loan was utilized to rig a vote in MakerDAO – something that many people have publicly condemned as being harmful to the Mintable community.

The Mintable marketplace offers some complex capabilities for trading NFTs, as well as some of the most fundamental elements prevalent in traditional ecommerce platforms — but absent from existing NFT marketplaces.

PleasrDAOis a select group of DeFi pioneers, early NFT collectors, and digital artists (started by NFT artist pplpleasr who have established a formidable yet philanthropic reputation for acquiring culturally significant pieces with a charitable touch.

Since purchasing its genesis piece, the Uniswap V3 NFT, the DAO’s goal has evolved and raised to acquire digital art that symbolizes and funds key ideas, movements, and causes that have been commemorated on-chain as NFTs. PleasrDAO has subsequently established a precedent for bidding on one-of-a-kind pieces, many of which contain significant messages that transcend cryptocurrency, exemplified by Stay Free, the NFT made public by Edward Snowden.

At the end of the day, people are social animals, yet marching under the flag of a shared vision free from the constraints of “trusted third parties” or even from the burden of trusting each other and instead relying on the immutability of the DAO’s smart contract solidity will only grow as a popular form of self-governance.

There is strength in numbers, typified by pooled assets and knowledge, all managed by DAOs underpinned by blockchain technology and led by creators, investors and devotees of art worldwide.