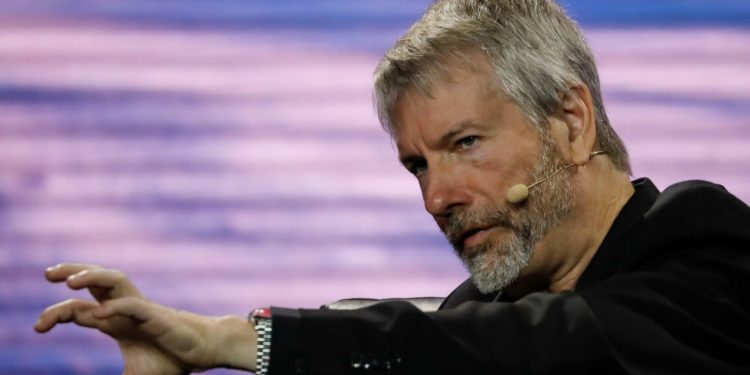 MicroStrategy, led by Michael Saylor, has invested heavily in bitcoin only to see the BTC price drop by 70% from an all time high set in November 2021. Image: Yahoo

MicroStrategy CEO and Bitcoin maximalist Michael Saylor is stepping down. In this article we’ll look at whether the loss is related to declining Bitcoin prices or Saylor’s expertise in the space. We’ll also examine the company’s current position in the market.

MicroStrategy has named a new CEO. Michael Saylor, who has served as the company’s CEO since 1989, will transition to the role of executive chairman on August 8. In his new role, he will be responsible for overseeing all aspects of the company’s business operations and its Bitcoin holdings. According to Saylor, the decision to split his role will give him more time to focus on these investments and its growing Bitcoin treasury.

While Saylor was the company’s CEO for nearly three decades, his recent hyperfocus on Bitcoin has taken its toll on the company’s balance sheet. The company has incurred a $917.8 million loss on the digital asset, largely because of the collapse in its price since its all-time high in November last year. Despite this, MicroStrategy’s stock price is up 16% at the time of writing, while Bitcoin is up more than 3% on major cryptocurrency exchanges.

Mr. Le has served as MicroStrategy’s President since July 2020. He has a background in finance and telecommunications, including a stint as a VP of strategy and business operations at NII Holdings. He worked in a consulting practice at Deloitte from 1998 to 2010.

Le says he doesn’t expect any major strategic changes at MicroStrategy. He has been aligned with Saylor on Bitcoin strategy and enterprise strategy, and he’s particularly pleased with the way the company’s CFO Andrew Kang has handled the financial division. However, he does anticipate a number of changes. Saylor will focus on the company’s innovation and corporate strategy while Le will run its bitcoin strategy.

The impact of declining Bitcoin prices on a company’s bottom line can vary dramatically. For example, when Bitcoin prices plummeted by 70 per cent in June, Celsius stopped accepting customer deposits and transfers, causing them to remain frozen since then.

On July 13, Celsius filed for chapter 11 bankruptcy protection. It’s not the only crypto company to suffer from the downturn. Three Arrows Capital, a Singapore-based crypto hedge fund, was forced to liquidate in June 2022.

The price of Bitcoin is a bellwether for the whole cryptocurrency market and has a tendency to trigger other sell-offs. As more investors lose confidence in digital currencies, the prices of cryptocurrencies decline as well. In December, the price of Ethereum fell below the $1,000 mark, its lowest level since January 2021. The price has since dropped steadily. It is now worth less than half of its previous value.

MicroStrategy’s new CEO will continue to focus on its bitcoin acquisition strategy and advocacy initiatives. As of June 30, MicroStrategy had raised $2.4 billion in debt and held 129,699 bitcoins. However, the company recorded impairment losses of $1.98 billion on the bitcoins it holds. However, this is unlikely to impact the company’s position in the market, according to BTIG analyst Mark Palmer.

What are the Benefits of DeFi for Bitcoin?