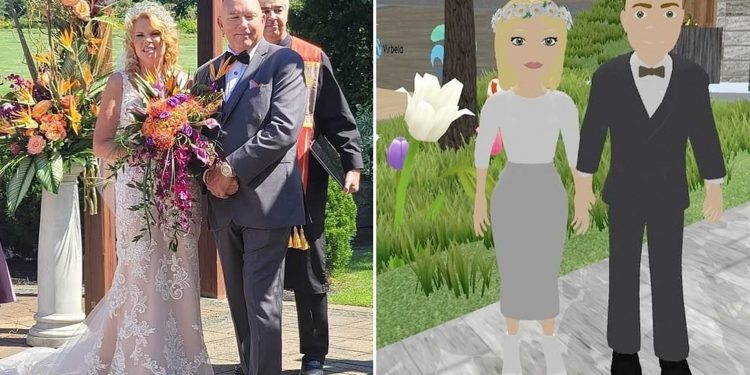 by Tom Nyarunda
in Metaverse
Reading Time: 3 mins read
0
Share on FacebookShare on TwitterShare on LinkedinShare via WhatsappShare via Email

At least 2,000 guests attended virtual ceremony at Decentraland. However, the couple’s bells and whistles big day didn’t go strictly according to plan, meaning that the Metaverse still needs to develop further to host similar ceremonies reliably.

Ryan and Candice Hurley from Phoenix became the first couple to tie the knot with their digital identities over the weekend in the first wedding in the Metaverse. The wedding ceremony at Decentraland was witnessed by Supreme Court Justice Clint Bolick and a virtual crowd of 2,000 guests on February 5.

The bride and groom hired Rose Law Group to formalize the marriage legally. The group’s founder and president, Jordan Rose, says it was the first-ever wedding held on a blockchain-based Metaverse. She stated:

“Because the metaverse is still in its infancy, we have developed the legal paradigm of a legally recognized marriage.”

Marriage on the blockchain

There is currently a raging debate on the legal status of the wedding despite the involvement of a prominent legal firm. The law firm hosted the wedding on its Decentraland estate and placed the marriage on the blockchain as an NFT. Guests could also get a rare NFT party favor that represented the historic event.

As per the American Marriage Ministries (AMM), all states that allow virtual online weddings require officiants and couples to use video-conferencing technology that will enable them to see and hear each other in real-time, without anything that distorts their appearance. Therefore, Metaverse weddings won’t be legally binding until a law changes.

Describing the potential of the Metaverse, Jordan Rose explained that “Unlike the real world, the Metaverse isn’t limited by physical constraints that restrict your perfect wedding. She added in the event descriptions that only in the Metaverse could your wildest, most imaginative dream wedding become a reality.” Stated said further:

Metaverse wedding not without some technical issues

Several unanticipated technical issues marred the event, such as Decentraland struggling to handle the number of attendees. Also, the NFT gifts for attendees were quickly claimed only about twenty minutes into the event. Shockingly, Ryan’s avatar was left at the aisle as Candice’s failed to make a digital appearance — but only for some guests. Depending on which server attendees had been split into, the bride was wearing a dress, a hoodie, or wasn’t there at all.

Since Facebook changed its name to Meta to concentrate on the Metaverse, several mainstream players have had plenty of interest. The Warner Music Group announced its entry into the Metaverse, joining pioneers like Nike, Adidas, and most recently Walmart and McDonalds. All of them are interested in taking the front seat in the Metaverse.

What are Rug Pulls in Crypto and How to Avoid Them?