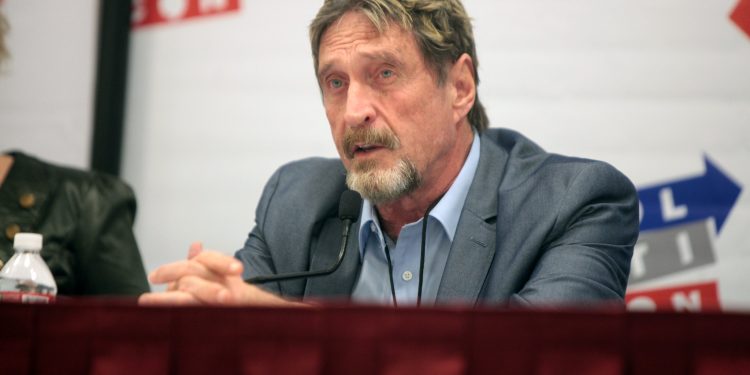 by Aaron Moses
in Bitcoin News
Reading Time: 2 mins read
0
Share on FacebookShare on TwitterShare on LinkedinShare via WhatsappShare via Email

Crypto nut, entrepreneur, and computer programmer John McAfee passed away on Wednesday, 23 June 2021, in a Barcelona prison. According to a Spanish newspaper, McAfee was being extradited to the U.S. for tax evasion via a recent court ruling.

McAfee was the founder of the security software company of the same name. McAfee had a contraversial public image. According to an article from the Independent back in March, McAfee was charged for fraud in federal court. Andy Strauss, a Manhattan U.S. district attorney said:

“McAfee and Watson (McAfee’s associate) exploited a widely used social media platform and enthusiasm among investors in the emerging cryptocurrency market to make millions through lies and deception.”

Prosecutors accused McAfee of raising publicity for cryptocurrencies he owned like Dogecoin and selling them for profit from what they call manipulating the market. However, the U.S. government has long been trying to extradite McAfee for tax evasion and failure of reporting income. McAfee has made a lot of hype in the crypto space since 2017 when he said Bitcoin’s price would be 500,000 by 2020.

How McAfee lost all of his crypto

McAfee also made headlines in 2012 after fleeing Belize after his neighbor was found dead. However, police eventually declared McAfee was not a suspect.

“The US believes I have hidden crypto. I wish I did but it has dissolved through the many hands of Team McAfee (your belief is not required), and my remaining assets are all seized. My friends evaporated through fear of association.”

McAfee however firmly believed crypto had the power to free people from the power structure of the global financial system.

Some speculate that authorities came down hard after McAfee because of his brazen call outs to the banks and the IRS. McAfee claimed he had not filed a tax return since 2010. And he even wrote a letter to the IRS back then informing them of his decisions to not pay anymore federal taxes. It would make sense for them to make an example of a figure like McAfee and say “This is what happens when you don’t pay taxes”.