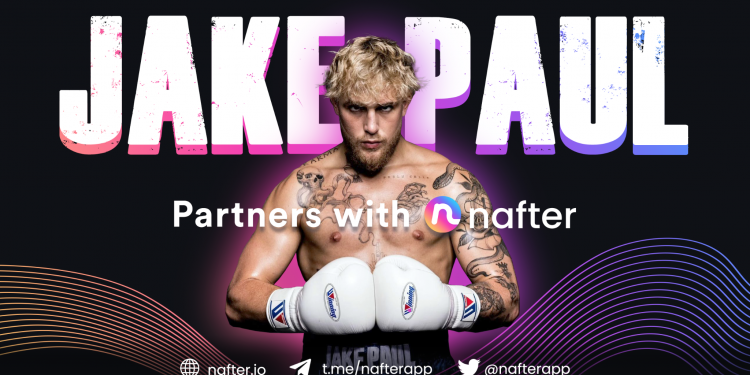 by Pascal Niggli
in NFTs
Reading Time: 3 mins read
0
Share on FacebookShare on TwitterShare on LinkedinShare via WhatsappShare via Email

The YouTube star and professional boxer Jake Paul announces a partnership with the first ever social media NFT platform Nafter where he will auction a series exclusive NFTs. All proceeds will go to a good cause.

The social media NFT platform Nafter has launched Season 2 of the Nafter platform by partnering with one of the most popular influencers on social media, Jake Paul. Nafter, the Instagram of NFTs is currently auctioning an exclusive Jake Paul NFT, minted by Jake Paul himself.

It is likely that the price for this exclusive NFT will rise substantially in the last hours as Jake Paul’s exclusive “Knockout” NFT sold for $10 million.

“We are very excited to have Jake Paul join us and mint his exclusive NFT on Nafter. Even more exciting is the fact that he chose to use NAFT token as the only accepted method of payment for his NFT bids. This is a great display of confidence in the Nafter platform, as well as an exciting debut of Nafter V1.1 and the NAFT token features. This is a great demonstration to future influencers and content creators who wish to use the Nafter platform to mint content and enter the exciting world of NFTs!”

Nafter is a groundbreaking, blockchain-based online NFT social network and marketplace allowing creators to mint NFTs on both Ethereum and Binance Smart Chain networks. Creators can mint NFT content from their phone or laptop, and sell the collectible content directly to their fans and followers for a fixed price or in an auction setting. The Nafter network is built on the Binance Smart Chain, and powered by its utility token, $NAFT.

Nafter has only been live for less than a month and has already attracted influencers, creators, and artists with a combined following of more than 70 million onto its platform. Quite impressive numbers for a less than 6 month old project.

Less than a month since the successful launch of Nafter v1.0, the team is excited to share the next iteration of the network – Nafter v1.1.

The updated Nafter brings with it a ton of front and backend upgrades, new ambassadors, new partners, and plenty of undisclosed surprises.

One of the most highly anticipated features is going live with the launch of the updated Nafter. The NAFT tokens can now be used as a method of payment for NFTs on the platform, for those creators who choose to accept the token.