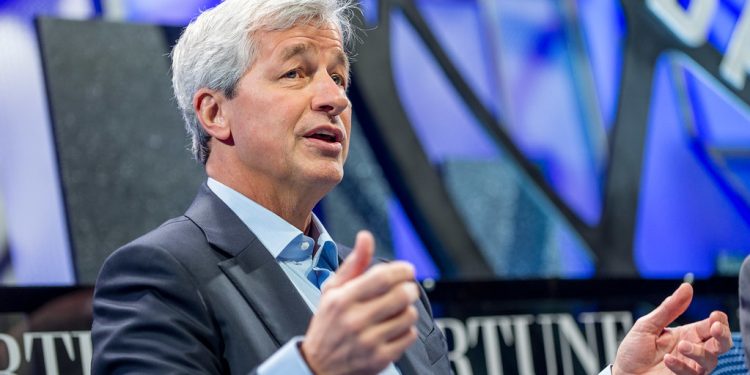 by Aaron Moses
in Markets, Politics
Reading Time: 2 mins read
0
Share on FacebookShare on TwitterShare on LinkedinShare via WhatsappShare via Email

In an unexpected move, JP Morgan has announced that it plans to offer private wealth clients Bitcoin funds. Meaning, they will manage Bitcoin investments for very high-end clients.

This is an unusual move given that Jamie Dimon, CEO of JP Morgan, said he would fire anyone if he found out they were trading Bitcoin. He even went so far as to say,

“If you buy Bitcoin, you’ll pay the price later.”

Meaning – he thinks Bitcoin is a scam. Or at least that’s what some thought. But it makes sense why Dimon would say this if you look back at further statements he’s made. In a section in the JP Morgan Chase & Co. Annual Report 2020 released last year titled Banks’ Enormous Competitive Threats — from Virtually Every Angle, Dimon said,

But it’s clear Dimon has some serious concerns about cryptocurrency – he calls it “shadow banking.” You can see this in another excerpt from the letter he wrote to his shareholders. He said,

“There are serious emerging issues that need to be dealt with – and rather quickly: the growth of shadow banking, the legal and regulatory status of cryptocurrencies”

Dimon also raised concerns about “Disclosures in private markets” and “effective regulations around market structure and transparency”. And why does Dimon raise this point? He would claim it would be for safety and to prevent criminal activity. But it seems obvious that banks are less concerned about terrorism and more concerned about control over the market.

Right now in the global financial system banks reign supreme. They are the arbiters of all transactions – nothing happens without their say so or approval. And now, they want all crypto and digital assets to be under their control as well. They want to take cuts and percentages of your staking APY and rewards, and they want to say what cryptos are legal to carry and what are not.

If Jamie Dimon and JP Morgan get what they want, it will not be a good scenario for crypto and blockchain enthusiasts. Think of our current global financial system, except everything is digital. That’s it. It’s not really any different than now, except it could even be worse. Now at least with cash, there is still some privacy and anonymity in the current financial system. But when a fully digital Central Bank backed currency is established, cash would likely no longer be a part of anyone’s daily financial transactions. So, the bank has a record of every purchase you make.

So, the whole attractive aspect about crypto is how it’s so different from the fiat money, and regulation will no doubt make crypto less appealing if it gives the control back to the banks.

Has Bitcoin Proven Itself As a Means of Payment in Everyday Life in Switzerland?

Bull Run For Crypto Not Over Yet Says EllioTrades