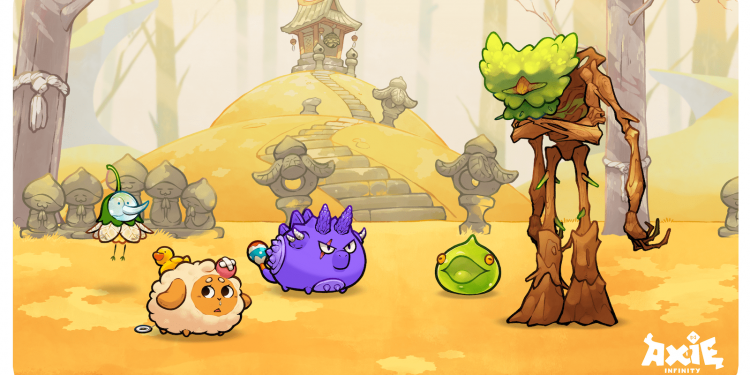 With over 2 million daily active users, Axie Infinity is the largest P2E game on the market, but it requires an upfront investment in NFTs to play—sometimes as much as $600—and developer Sky Mavis wants to reach far more players. To that end, they will soon release free “starter monsters” in the game to give new users a taste of the experience before spending any money on monsters.

Sky Mavis revealed plans for free starter Axies last year, but today announced that they could be right around the corner: the free-to-play feature will debut as part of the game’s massive Axie Infinity: Origin update, which will begin rolling out by the end of Q1 2022.

The play-to-earn model of Axie Infinity is based on NFTs, or cryptographic tokens that prove ownership of a digital item. In the case of Axie Infinity, players must first buy three Axie monster NFTs in order to play the Pokémon-inspired game, but they can then earn token rewards that can be exchanged for other cryptocurrencies.

Buying three Axie NFTs would have cost at least $600 in ETH at the height of the frenzy surrounding the Ethereum-based game last summer and fall. Even now, despite the game’s play-to-earn model’s economic issues, a trio of Axie NFTs costs more than $100.

The starter monsters in Axie Infinity will give players a taste of the game without the ability to earn SLP reward tokens—though some level of reward functionality may be added later. The free monsters will not be NFTs that can be sold or transferred, but will instead be included in the Axie Infinity game client.

Sky Mavis management stated earlier this year that free starter Axies would create a smoother on-ramp to the game, “resolving a missing bridge between awareness and hard activation.”

Along with the starter Axies, there will be a new “V3” battle system, which will be richer and more strategic than the current model, as well as new battle cards, power-ups, and other changes.

After launching its Ethereum sidechain, Ronin, which significantly reduced transaction fees and wait times, Axie Infinity saw a surge in interest last summer. According to CryptoSlam data, the game has generated approximately $4 billion in trading volume to date, making it the largest NFT project to date by that metric.

Although the NFT requirement is regarded as a barrier to entry for Axie Infinity, it has inspired a distinct Web3 industry of gaming guilds that run so-called “scholarship” programs. In such initiatives, NFT owners effectively rent their Axies to players, often from developing countries, who play the game and split the token profits.

The power of scholarship guilds

Yield Guild Games is the largest and arguably most well-known of the scholarship guilds, with funding from Andreessen Horowitz and support from crypto exchange FTX, but there are many others, including Ready Player DAO and Loot Squad.

As previously stated, Axie Infinity’s play-to-earn economy has recently declined, with both the SLP reward token and the AXS governance token losing significant value. Furthermore, NFT trading volume has dropped significantly in recent months, with the price of the floor (or cheapest available) Axie NFTs plummeting.

Sky Mavis announced last week that the token rewards model would be overhauled with the launch of the game’s 20th season, in an effort to halt SLP inflation. When the season began earlier this week, the value of both of the game’s tokens skyrocketed. Despite a pullback from the recent peak, SLP is up 158 percent in the last seven days, while AXS is up 24 percent in the same period.

To learn more about the debate surrounding costs associated with playing Axie Infinity check out our post here.

According to Sky Mavis 2022 is all about launching the Axie Infinity battle experience. In addition to updating game graphics, animations, game play and now reducing the cost of entry Axie Infinity should be better positioned for the future.