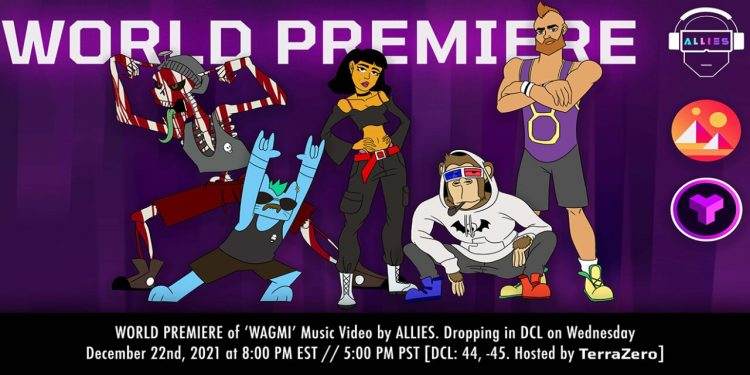 by blockzeit
in
Reading Time: 2 mins read
0
Share on FacebookShare on TwitterShare on LinkedinShare via WhatsappShare via Email
Time: 1:00 am - 2:00 am
Location: 12 Land Estate Near Dragon City, Decentraland
More Info
Metaverse Events

Join us for the premiere of, “WAGMI”, the debut release from the Metaverse’s first NFT band: ALLIES. The band features aa CryptoPunk, Bored Ape, Cool Cat, World of Women, and a Wicked Cranium

The event will be held at the new TerraZero Entertainment Center, located in Decentraland at 44, -45. Join members of the band, DeeZe and Cheetah, as they premiere the video live in Decentraland on Wednesday, Dec 22 from 01:00am to 02:00am UTC.

“Allies is a music group made up of static on-chain assets that integrate NFT communities through performances, shows and events in the metaverse. Our first single “WAGMI” premieres in Decentraland December 22nd. Stay tuned for more details. We are Allies.”

Deeze (Bored Ape Yacht Club) – When Deeze isn’t hosting twitter spaces , he’s playing Synyster Gates guitar on stage for Allies. With one of the most valuable NFT collections in the world, the Deeze Gallery is the most frequented in the metaverse. Stop by and you’ll find the biggest collectors and influencers in the space vibing with Deeze. https://twitter.com/DeezeFi

Cheetah (CyrptoPunks) – After working with GFunk and Beanie at Pixel Vault in the debut edition of PUNKS Comic, Cheetah is taking time away to tour the Metaverse with Allies. Cheetah plays drums and is one of the primary songwriters for the group. https://twitter.com/SportsCheetah

Kibbee (Cool Cats) – Years of writing and performing music in the real world led to this moment for Kibbee. He may not be tall, but he’s the most talented musician in Allies. Don’t let the stache fool you either, the ladies love him. Twitterless.

French (Wicked Craniums) – French wrote songs and played in punk rock bands with Cheetah prior to his Pixel Vault days. It was a no-brainer to make this Cranium a member of Allies. You can find French in the band bus working on the group’s next track. https://twitter.com/jetlef_frenchpf

The entry of big investors, governments, banks, and other institutions into the world of cryptocurrency has created a huge appetite...

HongKong, China, 24th January, 2022, Chainwire MetaVisa, a Web3.0 middleware protocol, officially announced that it has reached an agreement with...