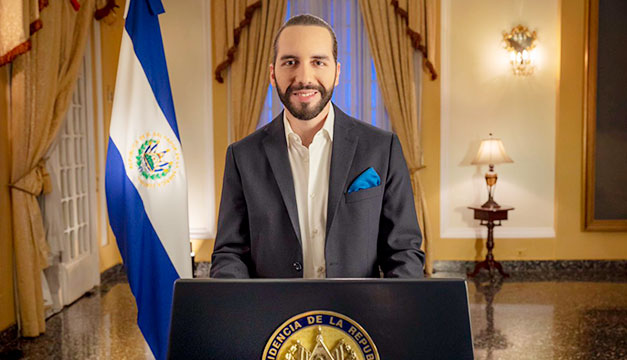 The ambitious pro-Bitcoin head of state made several predictions for BTC for 2022. The six-point forecast included the price of Bitcoin reaching $100,000 and two more countries adopting the cryptocurrency as legal tender.

The Salvadoran President Nayib Bukele took to Twitter to make wild predictions about Bitcoin for 2022. The President’s New Year predictions made some bold bets; including that two more countries would fall in line and adopt the cryptocurrency as its local currency.

President Bukele claimed his place in the history of the crypto sphere when he became the first head of state to adopt Bitcoin as legal tender on September 7, 2021. Bukele’s decision sparked a revolution that caught the attention of many world leaders. Regardless, he believes two more countries will follow this example.

El Salvador is now considered the most open country in terms of Bitcoin adoption, following the country’s pro-Bitcoin activities. After voting BTC to become legal tender in the country, Bukele hasn’t wasted a chance to explain the merits of BTC and has gone on to accumulate more coins during price dips. The President announced the country would use the profits of BTC sales to build schools and hospitals.

Bukele’s predictions are intriguing especially considering that El Salvador’s Ambassador to the United States, Milena Mayorga, said that if successful in their country, other countries “will follow” in Bitcoin adoption. Bukele stated:

“Bitcoin will become a major electoral issue in US elections this year.”

Indeed, many politicians, including 2020 Democratic presidential candidate Andrew Yang and Republican Senators Cynthia Lummis and Warren Davidson, have voiced their support for BTC. At the same time, others have expressed their concern over the asset. For instance, Senator Elizabeth Warren stated that Bitcoin is only beneficial to the rich. She said:

“I’m anxious to see how Bitcoin regulation will develop in America, with more and more politicians educating themselves on the issue.”

A sense of certainty in his predictions

The construction of Bitcoin City is another point raised in the President’s statement. The city is expected to have 0% income, capital gains, property, payroll, or municipal taxes, in addition to 0% CO2 emissions. Bukele also said he expects Bitcoin bonds issued on Block stream’s Liquid Network to “be oversubscribed. The Bitcoiner’s paradise announcement came at the end of Bitcoin week in El Salvador.”

Bukele is betting that BTC will finally reach the long-awaited $100,000 mark in 2022. The President also promised a “huge surprise” at the Bitcoin 2022 conference in Miami, Florida. One can only wonder what he has up his sleeve for the event he is supposed to attend in April. Following up with a secondary tweet, the President said, “This tweet will age well.” It seems Bukele has a sense of certainty in his predictions, but we will have to wait and see when and if they all come true this year.

The total supply of Bitcoin is limited to 21 million. Due to the use of rounding operators in the Bitcoin...

El Salvador plans to spend roughly 20 bills to Congress to establish a foundation for issuing Bitcoin bonds. The country...