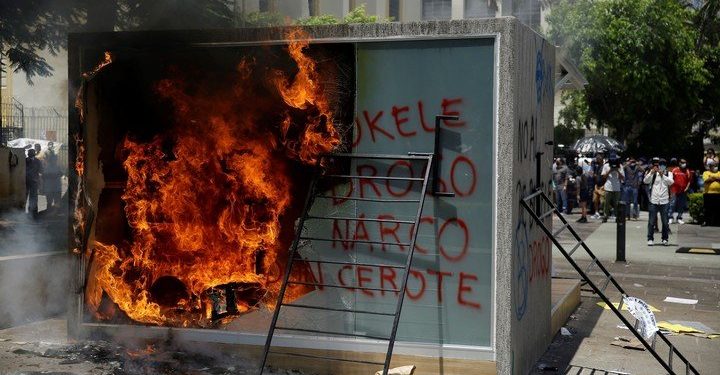 Thousands of demonstrators vandalized, smashed the windows, and set a Chivo digital wallet ATM kiosk on fire. The protesters were expressing anger at the introduction of Bitcoin as legal tender and feared that President Bukele would seek re-election in 2024.

The BTC machine was among the 200 the government installed after adopting cryptocurrency as legal tender alongside the U.S. dollar. The machine was defaced with an anti-BTC logo and a sign reading “Democracy is not for sale.” President Bukele wrote on his Twitter account:

“They say the ‘vandalism’ was the work of ‘infiltrators,’ but there has been vandalism in ALL their demonstrations […] and why weren’t there any shouts of ‘stop,’ or ‘Don’t do that?’”

No one would be forced to use Bitcoin

The damaged Chivo kiosk is part of the government’s efforts to facilitate the acceptance of Bitcoin as legal tender. The President had said he hoped the Bitcoin ATMs would be everywhere in the country but maintained no one would be forced to use Bitcoin.

The Bitcoin rollout has faced resistance by a group calling itself the Popular Resistance and Rebellion Block. The group staged a protest in July while veterans, retirees, disability pensioners, and workers marched the streets of San Salvador in August.

The result is worth the effort

While public opinion polls indicate the most people are opposed to Bitcoin becoming an official currency, Bukele says it will help Salvadorans send remittances from abroad. The digital wallet recently became overloaded by the large numbers of users cashing in on the $30 government bonus meant to incentivize its adoption by citizens.

The President recently admitted the three-month rollout was a bit ambitious, but he maintains that the result is worth the effort they were putting in place to address the glitches currently experienced. Bukele announced there were at least half a million people already actively using Bitcoin in the country. While all businesses with the technical capacity must accept Bitcoin payments, citizens are not obliged to use it.

Freefall: Crypto All-Stars Down 25% This Past Week