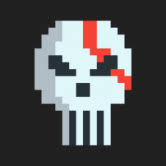 Frequently, the next big thing in NFTs turns out to be a project that has been running for months, if not years. Or, maybe even one that has been left for dead. Looking back at the rise of CryptoPunks, Curio Cards,and MoonCats, it’s clear that select historical collections experience a resurgence at some point.

What has happened before with legacy projects is now happening with CryptoSkulls. Years after the original project was launched, the NFT community has discovered renewed interest in this collection of 10,000 pixel-art skulls. Skulls have always been kinda cool, so a skull-themed NFT project seemed like a no-brainer (no pun intended).

Aside from the art and rarity, CryptoSkulls had a slow start. Given that the NFT market had yet to reach even a fraction of the user numbers seen in the previous year, a sufficient supply of the collection was minted and held within the official CryptoSkulls account itself. The collection’s final minting didn’t happen until August 2019, a few months after it first debuted and gained a following.

Each CryptoSkull is a playable token in the Gold of Skulls game. This will be the first game in which the collectible token’s unique nature affects the player’s uniqueness. And it will be ground-breaking. To aid game development, designers defined 1000 CryptoSkulls as Game Tokens — these tokens will have additional features in a game.

In conjunction with the announcement of the Gold of Skulls game, the CryptoSkulls team created and launched a limited Gold of Skulls ($GSK) ERC-20 standard coin with a total supply of 10,000,000. ShibaSwap can still be used to purchase $GSK at the moment.

$GSK is currently tradable and can be used as a payment token to purchase CryptoSkulls NFTs from the official CryptoSkulls account on OpenSea. $GSK could be used for in-game rewards in the Gold of Skulls game, development grants, and other things in the future.

Overall, CryptoSkulls outperforms many legacy projects because it is arguably the second-ever 10,000-supply PFP collection on the Ethereum blockchain, following CryptoPunks. However, this honor is contingent on one’s definition of a PFP project, as it is preceded by a couple of 10,000-supply gaming collectible projects. In any case, the rediscovery of an original project at such a low price point is always exciting in the space. This, combined with the fact that the project developers are still actively trading CryptoSkulls and developing Gold of Skulls, has contributed to an increase in trading volume in 2022.

While some may have expected CryptoSkulls to see increased secondaries in the fall of 2021 as a spooky NFT to collect for Halloween, sales began to seriously heat up on Jan. 11 as a result of key figures such as Gary Vee, Steve Aoki, GMoney, Matt Medved, Leonidas, and many more aping into the project.

It’s anyone’s guess where the project goes from here, but with Alex Slayer still at the helm and as active on NFT Twitter as ever, CryptoSkulls could become a major contender in the 2022 NFT avatar market, especially with the popularity of PFPs.

Skulls are iconic and easily recognized in identifying everything  from pirates and sports teams to death metal rockers. The CryptoSkulls project brings these icons to life one pixel at a time in the tradition of CrytpoPunks and more recently Blade Runner Punks. This is a project worth following.