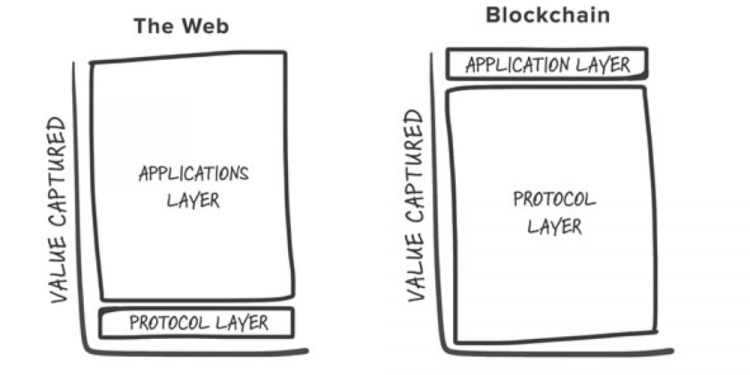 by Vincent Munene
in Technology
Reading Time: 3 mins read
0
Share on FacebookShare on TwitterShare on LinkedinShare via WhatsappShare via Email

The underlying notion of the Fat protocol thesis on blockchain technology is that it allows the protocol layer to accrue more value than the application layer. The argument is based on a shared data layer and speculative token attachment.

However, there has been a change in the paradigm shift on how we value crypto tokens. The change resulted from the death of the “fat protocol thesis” towards a long-lasting “fat app thesis.”

From its coining in 2016 by Joel Monegro, the goal was to highlight what Monegro believed to be the differences in value accrual between the internet and blockchain applications. The belief was based on the argument that web infrastructure allowed applications to retain most of the value over the underlying protocols. On the other hand, blockchains would retain almost all the value at the base protocol, not applications hence the term “fat protocol.”

The idea of a shared data layer leads to open and permissionless capabilities for blockchains, which leads to greater competition and reduced barriers to entry. Thus, it pushes fees close to zero as there is an optimization for user experience.

Additionally, a protocol token allows for a flywheel in which the token price appreciation draws in more adopters of the network. As more individuals adopt and build apps on the network, the token increases in value. It was Monegro’s perspective that the market cap of the protocol always grows faster than the combined value of the application built on top since the success of the application layer drives further speculation at the protocol layer. This paradigm shift is, however, quickly changing.

We are, therefore, in a place where applications are coming into their own. We are also shifting to a space where cash flow is king. Unlike Total Value Locked (TVL), where manipulation can easily occur, fees and revenue are generated to become the new scoreboard.

Cash flow can also be an exact measure of where value accrues along the transaction pipeline.

Beyond the direct cash flow, most base protocol value accrual stems from Maximal Extractable Value (MEV) extraction. Applications are now designing methods to mitigate or absorb the value of the MEV. An example is CowSwap’s CoW and Manifold Finances OpenMEV.

Having the unforkable state, applications do not need to have their fees converge to zero, as users are willing to pay for the distinct value they provide.

Thus, as applications continue to grow their user base, create moats, increase revenue and achieve product-market fit, we will have a world where applications accrue more value than the networks. Thus the “fat app thesis” is born and here to stay.