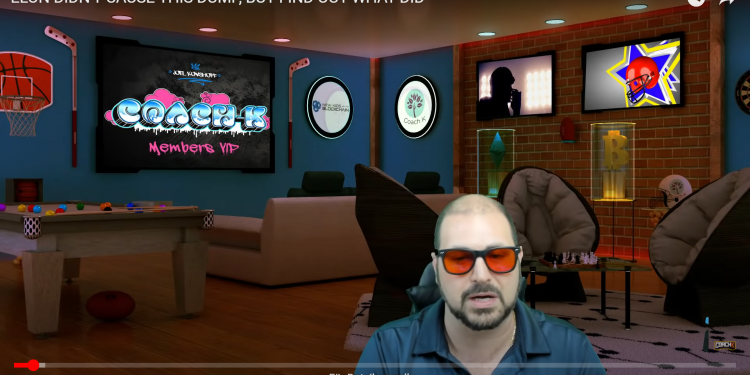 by Aaron Moses
in Bitcoin News, Markets, Trends
Reading Time: 3 mins read
0
Share on FacebookShare on TwitterShare on LinkedinShare via WhatsappShare via Email

Everyone wants to know whether Bitcoin will break out soon. Coach K, a reknown influencer in the crypto space, recently aired a livestream in which he states that we could first see a lot of sideways trading before the bull run continues. And: He doesn’t think that Elon Musk’s tweets move the market.

Coach K is one of the top influencers in the crypto space. He gets a lot of hate and a lot of love. However, one thing that makes Coach K stand out is that he is up front. He is a really smart investor who has minted crypto millionaires through his work and educational content. And, he expects that we could see a lot of sideways trading for Bitcoin before we continue the bull run. Coack K stated on his livestream that just aired:

“Bitcoin hit four resistance levels and failed. When you see resistance daily, there’s a good chance it’s going to get rejected before it goes back up. But if it doesn’t break resistance then it goes back down.”

Coach K said it’s good to be cautious about taking advice from influencers.

“Ask about who’s teaching you – how much risk management have they found success at?”

“This is very interesting – I’ve never seen this before – the hash ribbons posted capitulation – and generally when this happens it lasts a while and then we break out of capitulation and get a buy signal. It means we’re not ready to break out – but we’re building up. Miners are not selling.”

Coach K does not believe though that Bitcoin will crash another 50% like some people are forecasting.

“We’re not going to 20k right now. It could happen, I just don’t know if it’s going to happen. But the likelihood of this happening now is very low.

Many people in the market are saying Elon Musk caused the recent dip through a tweet he published on June 05.

However, Coach K is adamant that the failure to break these resistance levels that everyone was hoping for has nothing to do with Musk:

“Elon Musk does not move the market – get it through your head.”

Others claim Elon Musk’s tweets were a result of billboards that have been posted in Miami for the annual Bitcoin conference.

We can’t verify if this is true, but regardless it seems that Elon Musk is having a fun time hacking away at Bitcoin while still publishing tweets about Dogecoin

Coach K is not either bearish or bullish at the moment. He expects a lot of sideways trading in the coming weeks, and said he wouldn’t be surprised if it ends up being a very quiet summer for crypto. Coach K believes that one of the reasons for this is that we lack the trading volume. We need to be back to a full bull market. He commented:

“Volume needs to be there before we get bullish.”

However, he expects volume to return soon which should give Bitcoin the boost it needs to break resistance.

This artice is not financial advice. Please do your own research before buying crypto. If you enjoyed this article, you might also want to check out Can Bitcoin And Crypto Be Banned?

Who Is The Founder Of Cardano? Learn About Charles Hoskinson

Ethereum To Be A Proof Of Stake Network

The majority of central banks around the world are considering creating their own Central Bank Digital Currencies (CBDCs). These digital...