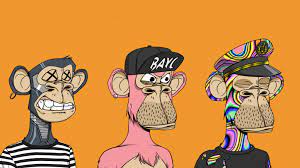 A Blockbuster Deal for BAYC

Yuga Labs, the parent company of the celebrity-heavy BAYC clique, has acquired the rights to distribute Larva Labs’ equally popular CryptoPunks and Meebits collections. This creates an NFT behemoth with a staggering $5B in digital art market capitalization, and it could be the start of an NFT consolidation spree.

The CryptoPunks set was released as a limited series in 2017 and is credited with inspiring the development of the ERC-721 standard for the exchange of non-fungible tokens and digital collectibles on the Ethereum blockchain.

The Bored Apes Yacht Club NFT series gained popularity due to a number of celebrity endorsements and investments, such as Justin Bieber spending nearly US$1.8 million on two Bored Ape NFTs in the span of a week.

Others who have ‘aped into” the BAYC realm and helped raise the NFT market profile include former NBA star Shaquille O’Neal, Post Malone, Snoop Dogg, Mark Cuban, Gwyneth Paltrow, Eminem, and Paris Hilton, to name just a few. Greg Solano and Wylie Aronow, the two creators behind the BAYC set, recently had their mysterious identities revealed after hiding behind the Gargamel and Gordon Goner digital personas.

The Center of NFT Gravity

According to the official statement, they are the founders of Yuga Labs, which now owns the most valuable NFT properties and intends to become the center of gravity for all things digital art:

Yuga Labs will be “the ideal stewards of the CrytoPunks and Meebits,” according to Larva Labs founders Matt Hall and John Watkinson. “In their hands, we are confident that they will continue to be vital, thriving projects in the emerging decentralized web,” they add, while also announcing that they will not personally transfer to the new entity, but will instead work on separate projects.

To assuage CryptoPunk NFT owners’ surprise at the merger, Yuga Labs’ first announcement of the Larva Labs sets acquisition was to confirm that they will transfer the IP (intellectual property) rights of individual NFTs to their buyers.

That’s what Yuga Labs does with its BAYC collection, but it’s something Larva was hesitant to grant CryptoPunks’ owners, despite the fact that it’s long been a pet peeve of theirs. The acquisition price is unknown, but the new mega non-fungible token entity may become a prime target for the NFT and digital art market regulation clouds that are gathering on the horizon.

Itheum Lands Investment From Elrond Foundation, Mechanism Capital And Others As it Gears for Launch