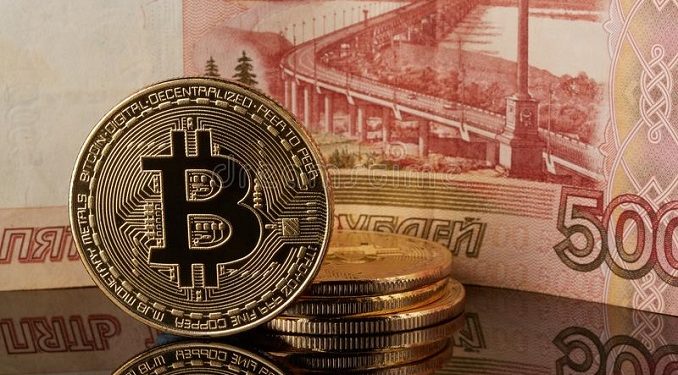 BTC has overtaken the Ruble after the Russian fiat currency experienced a major crash due to geopolitical events following the Ukrainian invasion. Russia’s central bank is raising its key rate to address a collapsing Ruble and prevent a possible bank run.

A series of geopolitical events playing in favor of Bitcoin has the world’s leading cryptocurrency into the big league of the global financial system. BTC is now ranked above the Russian Ruble in the global ranking of currencies with the largest capitalization, after a resounding crash of the Russian Ruble to lows not seen in the last 30 years.

The Russian fiat currency lost a significant against the U.S. dollar and BTC due to a series of sanctions by Western Nations protesting Putin’s decision to invade neighboring Ukraine. The sanctions include the cutoff of major Russian banks from SWIFT, the international payments messaging system.

The economic sanctions have been quick on the Russian economy as fear of a bank run gripped Russian citizens. This has seen Russian citizens flood local ATMs with cash withdrawal requests even as the Bank of Russia calls for calm. The rise in the price of Bitcoin has come amidst the growing conflict in Ukraine, even as Russian armored vehicles continued with their advance toward the capital city Kyiv.

The happenings in Russia coincided with an almost 15% recovery in Bitcoin’s price over the last 24 hours, pushing BTC above the capitalization of the Mexican peso and the Thai baht later on. The ongoing surge has now placed Bitcoin among the top 15 most valuable currencies globally, surpassing countries like Israel, Saudi Arabia, and Sweden, among others.

Ukraine yesterday called on cryptocurrency exchanges to block transactions involving Russian customers. Even though most of the leading exchanges declined to take extreme measures, WISE has already suspended services in Russia.

The Ukrainian crisis hasn’t gone unnoticed in the crypto community has made headlines as the fighting intensifies. The community has generally spoken out and taken sides in favor of Ukraine. After making a formal appeal for assistance, the Ukrainian government has received donations in Bitcoin, Ether, and USDT amounting to over $22 million.

The Ukrainian government has divulged a Bitcoin address to receive donations immediately and without any danger of potential censorship. However, even as Ukraine benefits, there are chances that Russia could also benefit. Since Bitcoin is neutral, reports indicate that Bitcoin trading has spiked among Russians hedging against the devaluation of their currency.