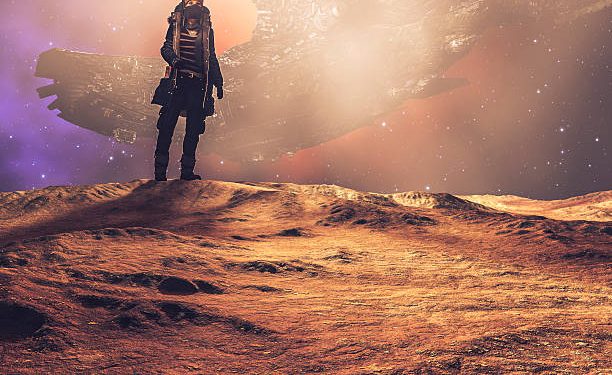 by Jay Speakman
in Metaverse
Reading Time: 8 mins read
0
Share on FacebookShare on TwitterShare on LinkedinShare via WhatsappShare via Email

Have you ever dreamed of ruling your own alien state on a wacky planet in a galaxy far, far away? How about adding some NFTs into the mix for some money-making potential? Well, there’s a new spacefaring MMORPG coming out that just might be what you are looking for!

Originally conceived by an independent team of developers, Astral Pioneers is an upcoming metaverse project that aims to turn that fantasy into reality.

What are Astral Pioneers?

Astral Pioneers is an upcoming blockchain game that features 30 unique planets across a virtual galaxy, each with its own resources. In Astral Pioneers, players assume the role of a human with the power to perform astral projections to other planets across the galaxy, making them take the form of an alien being.

Players can create funky alien avatars to join the universe by buying land and mining for different resources to build structures that function as NFTs. The NFTs are tradeable with other players using in-game currency, along with the mined resources.

In addition to the resource-driven economy, players will also be able to participate in player-driven events, like social gatherings and elections. The latter will be done through player voting rights, and players will be able to legislate their laws on their own land.

While all these proposed ideas sound almost like an intergalactic political simulator, Astral Pioneers aims to be a sci-fi space-building game with RPG mechanics at its core. It sure sounds ambitious, but there are some interesting ideas in its premise that promise to make it stand out from other blockchain projects.

Who is behind it and what is their vision?

Astral Pioneers is a project founded by Greg Betz, a blockchain architect based in Columbus, Ohio. Greg has been involved with blockchain businesses for over half a decade now and is certainly no stranger to the concept of games on the blockchain.

Inspired by other blockchain metaverse projects like Sandbox, Decentraland, and Otherside, Betz envisioned Astral Pioneers as a digital play-to-earn (P2E) world where players can have fun while also making money.

Betz is collaborating with artist Malcolm Smith, who is the creator of Blue Pixie comics, and Generativenfts.io, an NFT creation group for engineering and technical support. Betz wanted to create a game with an actual government, while also allowing players and creators the freedom to mint and trade NFTs on a single platform.

“We are the first metaverse with an actual government and the first to have mineable resources in the game world,” says Betz. The developers plan to add RPG-style quests where players can collect resources and ‘magical items’ that function as NFTs.

The developers also want to offer more than just a game. As development progresses, the team wants to be able to bring live events like concerts into the world. These events would be available to the public for free.

“We’d like to see Astral Pioneers as the premier virtual location of musical events,” adds Betz.

It’s quite a coincidence that the project title is reminiscent of Glenn Towery’s Funk Music tribute: Starfunk and the Astral Pioneers.

What are the key features of Astral Pioneers?

Betz decided to make the project on the Ethereum blockchain, a decision that significantly impacts the design of the metaverse. Astral Pioneers might just be the blockchain game to boast a few other firsts in the blockchain game space (no pun intended), thanks to Ethereum’s built-in next-generation functionality. The blockchain enables the players to interact with others in multiple ways, allowing both internal and external trading.

Ethereum allows the team to build a metaverse around a tokenized economy, using the ERC-721A token standard. This version of the native Ethereum smart contract token is optimized for gas usage (the blockchain’s native cost management resource). The standard allows multiple players to mine land resources and mint NFTs with minimal gas usage.

The tokenization inherent in Ethereum, and subsequently Astral Pioneers, add several layers of governance, identity management, and Defi capability to the game. If you are familiar with how blockchain works, all of these features sound like staking and smart contracts made for a game.

To get started, players will have to purchase an avatar, an Alien NFT display picture plus a 1/1 environmental scene in the background. The starting price is 0.0888 ETH. Players will be able to choose from “multiple alien races, with unique traits.” Smith’s signature art style is a notable feature in these avatars.

The game will use its own stablecoin for in-game transactions, dubbed APIC, that can be used to buy land and resources. New players will get 50,000 APIC from the start and will be able to use this to purchase land on one of the 90,000 states on the 30 different planets.

Players can mine their land for 15 different types of resources, which are in limited supply. There is no need to worry about supplies running out too quickly, as the team has put generous limits on them. Each resource is represented by a unique ERC token and these are consumed on use for crafting items. One type of crafted item is a blueprint, which can be sold by players on the marketplace.

Betz notes that this drives an external economy since the resource tokens can be sold by players for in-game currency and external currency. “Since resource tokens are burned when making items, everything that players create has an intrinsic value.”

As we mentioned earlier, the game will feature quests where players will be asked to perform in-game tasks. Completion of quests will reward players with regular resources, secret and rare resources, and magical items. All of these items can be sold on the marketplace, with some of the unique items tradable as NFTs. These quests will give the game its RPG feel.

In-game governance is of two types. Both types heavily favor APIC holders, although they work in different ways. The first form of governance ties players to votes for anyone directing the Astral Pioneers Charity Fund. The team aims to grow this fund to a value of a billion dollars by 2033.

Next, the players will be able to govern in-game events by participating in political assemblies in the form of state senates and legislations. Players will need to be citizens of their respective states to participate in these activities. There are some stipulations for how all of this can be done. The team has documented all of these in a whitepaper. The team hopes to keep matters as transparent as possible, as it is vital to building trust in the player base.

Astral Pioneers allows anonymous users to play for free. These players appear in-game as spirits. Spirits will be able to view public events such as live concerts. Registered players logged in to the metaverse will have to create an avatar for 100 APIC. These players will be able to play the base game, but with no voting rights.

For the ultimate experience, players can pay an additional 200 APIC per user to become a citizen of any state. Getting citizenship will require players to complete a detailed KYC form, after which they will get a Soulbound Token, a non-transferable NFT that is cryptographically linked to a player’s account.

The Soulbound Token gives player accounts account voting rights in-game. The developers want to ensure that the in-game economy is safe for everyone and includes committed players that are real humans. Using a multilayered token system allows them to implement such controls in-game.

The team plans to add a way for players to lend or invest their APIC or other resource tokens for profit. This will be linked to the charity DAO as well as in-game DAOs that are run by players.

Astral Pioneers is a project grounded in a comprehensive internal and external ecosystem, based on the tokenization offered by Ethereum.

It offers players the fantasy of running their own interplanetary empire. Min-maxers can engage in in-game resource and currency economy while managing resources. For role-players, there are options to become a tycoon or a political party frontman, or both. For collectors and creators, there is an in-game economy to buy and sell digital goodies.

And for anyone else who just wants to be a free spirit, there’s a complimentary ticket for a musical party. Whatever you want to be, or do, Astral Pioneers offers players a metaverse with lots of freedom.

When can we expect a launch?

Betz and his team have not announced a concrete launch date yet. However, they have laid down a roadmap for the project, where they detail the various Astral Pioneers’ milestones. The current plan is to launch different phases of the game over 7 seasons, starting with NFT minting, and rounding off with the first donation to the DAO charity.

While there are many existing and upcoming blockchain metaverses, Astral Pioneers appears to be one of the more promising ones from the lot. You can learn more about the project here, and drop by their Discord to say hi to the developer team and the community!